In the papers today... 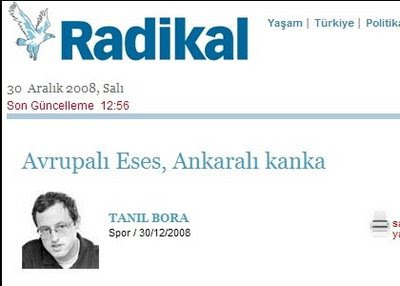 Got quite a shock this morning as I was reading through the papers when I discovered a Tanil Bora piece in Radikal about foreigners supporting Eskisehirspor. Seems as if a bunch of Turks and Erasmus students from various European countries meet up for breakfast, head off to a bar and then make their way to the stadium. How very much like us, I thought (without the breakfast bit obviously).

Then came the shock. The sub-heading was "Ankara'da top yuvarlak" (which translates as "The ball is round in Ankara").

A small quote from the article (which I shall translate in full when I get the time).

"A blog for football lovers in Ankara", is how they introduce themselves, then warning, "except for those who like Ankaraspor obviously...

The article continues at some length and as I said before I'll translate it later on. In the meantime if you know Turkish check out Tanil Bey's article.
By Oz Kanka - December 30, 2008