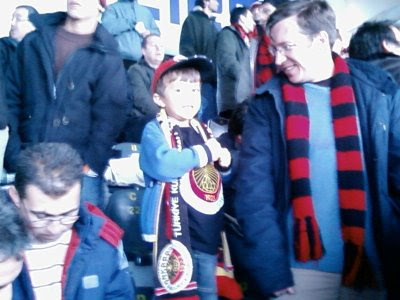 How is it that Gencler can completely outplay league leaders Sivas and yet still lose 2-1. Depressing stuff.

Due to Mrs. Oz Kanka preparing for a dinner party I was ordered to take Little Oz Kanka Matthew along to the match yesterday. It was lucky really as Matthew was the only person to show up at the Chopin at anywhere near the appointed midday meet up. So I got to discuss Father Christmas and debated which transformer is the best at fighting... until Dan the Man showed up late in the show. A few minutes later Flying Dutchman Kanka Carlo waltzed in and just as we were about to leave Alpine Kanka Wolfgang, his son Chris and a mate of theirs, Mustafa.

A decent crowd for a wet Sunday and Genclerbirligi came out well. Aussie Bruce and Kahe up front were both looking good and Troisi seems to be getting better each game. Ignore the "scores" given to the players in Hurriyet today, the team played well, even after we went behind in the 37th minute.

The team ignored the referee and linesman who certainly seemed to be on Sivas' side, we were denied what looked like a fairly clear cut penalty and were being constantly pinged for off side when it was pretty clear that Aussie Bruce was nowhere near offside.

So we kept on pushing and it was a great pass from Mehmet Nas which Aussie Bruce headed in just before the half time break. The fans were cheering and we were definitely happy with what we had seen.

Second half and things weren't as good as the first but yet again we dominated. Then in what was Sivas' second chance of the match, they scored. Argghhh.

Gencler kept going for the eqauliser but it just wouln't come. Shots came off the post, others were saved, others were cleared by desperate Sivas defenders.

Not sure what the coach Samet Aybaba was doing as he only made one substitution for the whole match when it was pretty clear that replacing some tiring legs would have been a good idea. Towards the end the Genclerbirligi fans turned on him singing "Samet gitsin. El Saka kalsin" in reference to the mind-boggling fact that Aybaba not only refuses to play the man who was our captain a couple of weeks ago but also refused to let him even train with the team last week. He has also now been condemned for racist comments concerning the fact that El Saka is an Arab. Not nice, and he should have been sacked on the spot.

A few weeks off now. Happy Christmas all and fingers crossed Father Christmas sends us a present of a couple of decent footballers.
By Oz Kanka - December 22, 2008