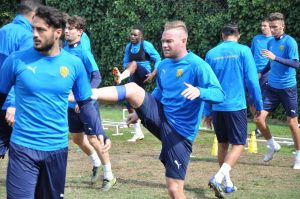 Turkish football clubs have historically run into severe financial problems due to being poorly run, corruption and trying to buy their way to success. Every season there are well supported clubs who either face bankruptcy, transfer bans, fines and a loss of their fan base who become disillusioned with how their beloved clubs are being run.

Clubs such as Karsiyaka, Kocaelispor, Sakaryaspor, Gaziantepspor, Altay, Diyarbakirspor, Mersin, Orduspor, Kayseri Erciyesspor and Ankaragucu have all hit rock bottom at some point due to crippling debts that have saw these clubs fall down the leagues with some having to reform as a new club such as Yeni Orduspor.

Ankaragucu against the odds fought against the plan by Melih Gokcek to bankrupt the club, and change the name of Ankaraspor to Ankaragucu in order to remove the clubs huge debts. The fans protested against this and took pride that Ankaragucu are one of Turkeys oldest clubs formed in 1910. They would rather play in the lower leagues with their history intact that reform as some new manufactured entity.

Mehmet Yiginer has along with his management team brought some stability to Ankaragucu and after 2 successive promotions, the club is now back in the Super Lig after a 6 year absence.

For the first 5-6 weeks of the season, things were going very well for the club, and only last Monday night they could have went 3rd with a win over Antalyaspor. Unfortunately injuries to a number of key players, left the team short of players and they have lost their last 2 games against Antalyaspor and Bursaspor.

Those defeats have led to manager Ismail Kartal advising the media that he is up against it as the players havent been paid wages, and this is causing a lot of unrest especially with the foreign players at the club.

I met with the club on Monday and asked why the players werent being paid. They advised that the club still has a lot of debt from the Melih Gokcek period at the club and are still paying off these debts. Any money the club are supposed to receive from TV Money, or the money for winning games or drawing in the league is being withheld by the TFF and used to pay off old debts. The club are working on paying the players ASAP but need to find new ways of bringing income into the club through local businessmen in Ankara.

Its not just Ankaragucu who have these financial problems, the majority of Turkish clubs have huge debts apart from the municipal teams such as Kasimpasa, Basaksehir and also Rizespor who are in a decent financial place.

Turkeys big clubs such as Fenerbahce, Galatasaray, Besiktas, Bursaspor, and Trabzonspor all struggle to meet the financial fair play criteria with all with the exception of Besiktas having had some sort of ban over the last couple of years, Besiktas still have a restriction in place although not to the same level as the others.

With the Turkish Lira taking a hit at the moment, there is a lot of uncertainty within Turkish football. Galatasaray although League champions last season, and performing well in the Champions League so far. There debt was over 590 Million Euros, although they are still to receive over £300 million Euros in revenues. Fenerbahce announced their debt is at 620 million Euro, Trabzonspor 169 Million Euros and Besiktas 418 Million Euros.

The debts and restrictions on these clubs have led to a more competitive and exciting Super Lig, with teams dropping points on a more regular basis and anyone can beat anyone. Akhisar who were sitting at the bottom of the table handed Galatasaray their first defeat of the season a couple of weeks ago.

The problem for Turkish football though is that the more these debts rise, and the longer the transfer restrictions are in place, you are going to see an effect on the clubs results in Europe. Besiktas had a fantastic campaign in the Champions League last season flying the flag for Turkish football. Instead of strengthened the squad in the summer and progressing, Besiktas have been unable to do so and are playing in the Europa League this campaign. A loss last week in Malmo is a reflection on how these financial problems will impact Turkish Clubs.

One of Turkeys most well supported clubs Eskisehirspor find themselves at the foot of the table of the Turkish Championship (2nd Tier) and again this is due to their financial problems and a transfer ban which means they are playing with a youth team.

There is no quick fix as to how Turkish football can move forward. The clubs need to be more astute commercially and the TFF need to actually start doing their job and manage their membership clubs. If clubs are failing to pay players wages, they shouldn't be allowed to sign new players in the meantime as this only adds to the debt, unless a player is leaving and the new player isn't making the wage budget any higher. There needs to be an end also to the weekly fines the TFF hands out to its clubs due to fans swearing. A ludicrous decision with their member clubs in serious financial footing and they decide to fine clubs despite Passolig having been introduced.

The future of Ankaragucu also remains uncertain, this season is all about remaining in the Turkish Super Lig and building on that. Relegation is unthinkable.
By Nady - October 11, 2018