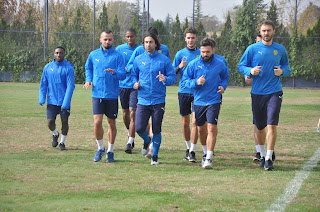 Ismail Kartal returns to face his former club Fenerbahce on Sunday night as his Ankaragucu side look for all 3 points against the Istanbul team who are in desperate need of a win as they sit 1 place outside the relegation zone. Phillip Cocu hasn't had the best of starts with Fenerbahce with only 2 wins in his opening 9 games. Pressure is starting to mount on the Dutchman who said in his post match interview that he doesn't know why his team are not performing.

Ankaragucu boss, Ismail Kartal knows all to well the pressures of managing a club like Fenerbahce and will have some sympathy for Cocu, but he is going there for the 3 points which could ultimately see Cocu out of a job by Sunday night.

In his only season in charge of Fenerbahce, Kartal finished 2nd in the League, Turkish Cup runners up and won the Turkish Super Cup. Not the worst record for a manager, but with the players at his disposal the fans expected more and 2nd is never good enough for any Istanbul side. Ismail was disappointed not to be kept on as manager and has always maintained that at Fenerbahce, Eskisehirspor and Gaziantepspor he had so many obstacles in his way with financial problems at each club.

His time at Ankaragucu has been a huge success. Despite calls for his resignation after a slow start last season in the PTT Lig, Ismail Kartal has become a fans favourite. He won the PTT Lig in his first season, again despite the financial problems at the club. And this season he has continued that form taking Ankaragucu to 9th in the table. The team that played against Yeni Malatyaspor at the weekend had 8 players from last seasons PTT Lig squad on the pitch. Again he has had to put up with financial problems with players not being paid, injuries and even the pitch the team train on not being up to standard.

Thankfully the board have again stepped up and the players have now been paid and they invested 600,000 Euros in a new training pitch. Right from kick off on Sunday against Malatyaspor you could see the spring in the step of the players and the lift they had from off field issues being resolved. The players worked their socks off and although there is still a lot of work to be done in the attacking side of play, Ankaragucu are showing they have one of the best defensive set ups in the Super Lig.

Yalcin Ayhan and Alihan Kubalas have formed an outstanding partnership. They are both warriors who win every ball in the air and are very difficult to get past. Erdem and Pinto have been brilliant both defensively and going forward.

In the middle of the park Djedje and Faty have also formed an excellent partnership and if we can just find another midfielder with a creative spark that would compliment the other two. Anton Putsila could be that man but he is still struggling with a foot injury.

Alessio Cerci showed his quality at the weekend and hopefully will now get fitter as the weeks go by. Mokhtar is back from injury this weekend and Bifouma is available but needs to show more consistency if he wants to find his way back in the starting line up.

Fenerbahce have some talented players in Andre Ayew, Islam Slimani, Yassine Benzia and many others through their squad. Unfortunately for Cocu the team isn't performing anywhere near where its capable of. There is no doubting that this current squad isn't as good as previous Fenerbahce sides, but to have only won 2 of their opening 9 games isn't good enough and anything other than a win on Sunday could see Cocu out of a job.

More worryingly for Cocu is that they have only scored 5 goals in their 9 games and after another goalless draw with Sivasspor at the weekend he said that he doesn't know what the issue is. That wont fill the Fenerbahce board or fans with confidence.

We have a hard working full of confidence Ankaragucu side going to Istanbul against a Fenerbahce team low on confidence and not playing for their manager. Will it be a case of Ankaragucu putting in the final nail of the coffin, or can Fenerbahce kick start their season under the dutchman?