Um Bongo in the Congo - The Zaire trio who starred for Ankaragucu! 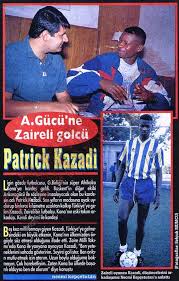 Back in the early 90s Genclerbirligi had a lot of success in signing African players such as Souleymane Youla, Geremi Nijtap, Andre Kona and John Moshoeu. Gencler would sign these young Africans for small fees on low salaries and then sell them on for a higher profit which allowed them to reinvest in the squad again.

Their city neighbors took notice of this successful signing policy and decided to look more to the African market than they previously had. Ankaragucu looked to Zaire a nation that is today known as the Democratic Republic of Congo and made famous by the drink Um Bongo, which strangely enough isn't anything to do with the Congo.

The pick of the signings was the magical winger Ndayi Kalenga who the club signed from Amazulu another South African premier league side.

Both Kalenga and Kazadi signed for the club together, with Bunene signing up a year later. At first the trio struggled with the language barrier. So much so that Kalenga was sent off in one of the games against Fenerbahce after celebrating a goal in which he was yellow carded, Kalenga didn't understand what the referee was booking him for and continued to celebrate which led to a second yellow.

Kazedi struggled to make any impact at the club although he did play 23 games in his only season scoring 1 goal. Kalenga on the other hand made his mark with some impressive performances. His style of play excited the Ankaragucu fans as the fast and skillful winger dazzled his way past opposing defenders creating many chances and scoring goals.

Kalenga played 32 games scoring 12 goals in his first season and his most memorable moment was the 2-1 victory over Galatasaray at home. The Zaire winger scored both goals which made him a fans favorite with the Ankaragucu fans. Kalenga was also key in Ankaragucu staying in the Super Lig after a narrowly avoiding relegation.

Patrick Kazedi left the club at the end of the campaign after 1 season, but his fellow native Bunene Ngaduane joined the club to keep Kalenga company. Ankaragucu were hoping Bunene could achieve the same level of success as Kalenga had.

Bunene arrived with an excellent reputation from the South African league, he was the big physical striker that gave defenders nightmares. Kalenga continued to impress with another 10 goals in 33 games but Bunene failed to live up to his promise scoring only 6 goals in 29 games and leaving at the start of the following season.

Ankaragucu finished a more respectable 11th in the league in Kalengas second season as he became the key player for Ankaragucu. In his 3rd season Kalenga was still producing the goods along with 2 other foreign players. Peruvian forward Pablo Ambrosi and Australian Vlado Bosinovski. Six goals in 30 games was his least productive season but still a good account for a wide player in the top league of Turkish football.

After 3 excellent seasons with the club, N'Dayi Kalenga would move onto Altay for a new challenge in his career. Ankaragucu had a new influx of Africans including Ohene Kennedy, Fernand Coulibaly and Nii Lamptey who would be given the job of filling the void left by the brilliant man from Zaire.
By Nady - October 19, 2018