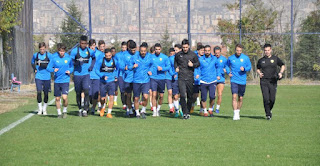 Ankaragucu are back in Cup action tomorrow as they host 4th tier side Erbaaspor in what will be an opportunity for some of the fringe players to get some first team action. After their stunning win at Fenerbahce the team face a different type of test against an Erbaaspor team who will be coming to Ankara looking to cause an upset.

The priority for Ankaragucu this season is the Super Lig, staying up was the initial target, but now sitting 6th after 10 games you could be forgiven for dreaming about European football next season. That said, Ankaragucu have failed miserably in the Turkish Cup in recent years, but they have a good chance of progressing to the group stages this year. After that who knows how far the team can go and its also a realistic goal to win the Turkish Cup. Previous seasons have shown with the likes of Akhisar and Konyaspor that those who take it seriously have a great chance of silverware.

The likes of Kehinde, Mahmut Akan, Youness Mokhtar, Kaan Uykur, Altay Bayindir, Mert Aydeniz and Ilhan Parlak should all feature tomorrow which will allow some of the first team players to get some rest ahead of Sundays match with Kayserispor.

Erbaaspor have only won 1 of their first 9 games in Lig 3 and lost 1-0 at home against Nazilli at the weekend. In those 9 games they have only scored 5 goals which seems to be the main issue for the team as they have only conceded 9 goals from those games.

Despite Erbaaspor struggling at the foot of the 4th tier in Turkish Football, Ankaragucu will still need to show them respect and take the match seriously. That said, even with the team being made up of fringe players, Ankaragucu should have too much quality for Erbaaspor.

These are the type of games that give players the platform and go an show Ismail Kartal why they deserve a place in the first team. Youness Mokhtar and Kehinde will form a nice partnership up front with Ilhan while youth products such as Altay, Mert and Kaan are knocking on the door too. Since Ismail Kartal came to the club there hasnt been a youth player that has broke into the team and held down a regular place. Altay looks to have the best chance of making it, but he has two excellent goalkeepers in Hopf and Korcan ahead of him.

The game tomorrow will be played at Yenikent which will likely be empty as the game kicks off at 3pm when everyone is at School and Work. TV always comes before football fans unfortunately.