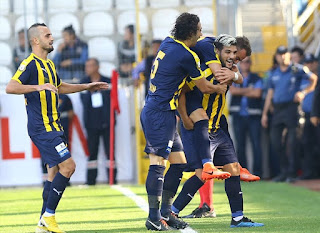 Moestafa El Kabir rolled into Ankara overweight and his career in Turkish football in question due to his condition and shape that looked more at home as a Sumo wrestler than a professional footballer. Many Ankaragucu fans questioned the signing and he was the subject to many negative posts and jokes on social media.

Although born in Morocco, El Kabir has spent most of his life in Holland, starting his footballing career with spells at both Dutch giants Ajax and Feyenoord. Talent has never been in question for the flamboyant and likeable North African, but even from a young age his off field problems and disciplinary has held him back.

After leaving NEC due to disciplinary problems he made his move to Mjallby in Sweden where he showed his quality with 16 goals in 38 games. His impressive performances earned him a loan move to Cagliari in Italy but injury problems saw him score only 1 goal in his 7 games with the Sardinians who decided against  taking up the option of a permanent deal.

Another successful spell in Sweden where he scored 19 goals in 32 games for Hacken saw him win a lucrative move to Al Ahli before Turkish Super Lig side Genclerbirlig signed him on a free transfer. Gencler were fighting against relegation but the signing of El Kabir lifted everyone at the club and his impressive performances and work rate played a huge part in the team avoiding relegation. El Kabir scored 9 goals and earned himself as a favorite amongst the Gencler fans. Surprisingly El Kabir decided against staying in Turkey and instead made the move to Japan at the end of the season.

After a disappointing spell in Japan, El Kabir moved back to Turkey with Antalyaspor. This time he showed flashes of his form at Gencler, but never reached the same levels and was out of shape and over weight.

Antalyaspor terminated the Moroccans contract and it looked unlikely that he would return to Turkey. Ismail Kartal however had other ideas and decided to sign El Kabir as his main striker for the 2018/19 campaign.

Since day 1, El Kabir has acknowledged that he needs to lose weight and get back in shape. He has worked extremely hard and lost a lot of that initial excess weight and looks closer to being in the shape suitable for a professional footballer.

A goal on his debut against Galatasaray and the winning goal in a 1-0 win over Akhisar are his 2 league goals to date in 7 games. However its his all round play that has impressed the Ankaragucu fans. Despite his 5ft 8 Height which makes it difficult playing as the lone striker, its his Work Rate, technique, skill and hold up play that plays a crucial part in the way Ankaragucu play.

You just have to look at the Bursaspor game as an example. This was the worst performance of the season from Ankaragucu and it coincided with El Kabir missing the match due to injury. There was no one there for Ankaragucu to hold up play, or even run in behind as El Kabir can do both.

Thankfully El Kabir is back in training and should be available for selection this weekend against Yeni Malatyaspor. At the age of 30, the little magician has reached his peak, but it would be interesting to see the level he could reach if he can get into peak fitness. He still has a long way to go but has worked hard to get to this stage. Another half stone of weight could be the difference  in playing a key part in survival for Ankaragucu in the Super Lig.
By Nady - October 17, 2018