Sead Sabotic - The prolific Bosnian striker who lit up the Super Lig in the 90s! 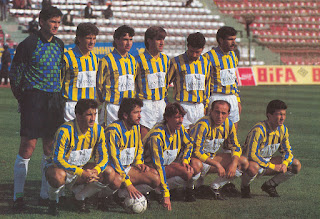 Every club in football knows the value of a good striker who can consistently put the ball in the back of the net. Clubs across Europe are paying ridiculous amounts of money for that player who they believe can either be the difference between winning the League and coming second, and at the other end surviving or relegation.

Most clubs go through striker after striker before they find that gem, and then after maybe 1 season of finding the back of the net, one of Europes elite comes calling and the search begins all over again.

In 1990 we had arguably the best World Cup ever in Italia 90 with some phenominal strikers such as Gary Linekar, Jurgen Klinsmann, Rudi Voller, Marco Van Basten, Roger Milla, Romario, Claudio Caniggia, Gabriel Battistuta, Roberto Baggio, and the list goes on. Even back then Strikers were worth their weight in gold.

At this period a young Bosnian striker was raising eyebrows in the Turkish Super Lig with Adanaspor. In his first season he scored 19 goals which earned him a move to Ankaragucu and he didn't disappoint.

Samet Aybaba brought Sabotic to the club and he got off to a fantastic start scoring his first goal in the Turkish Cup against Aydinspor in a 4-0 win. On his Home league debut he scored against his former side Adanaspor and by then the Ankaragucu fans knew they had a quality striker in their team.

Another goal in his first derby match against Genclerbirligi was followed up by a brilliant team goal against Besiktas in a 2-2 draw. Sinan Engin his Ankaragucu team mate however scored the goal of the game with a 30 yard screamer into the top corner in front of a sold out Ankaragucu crowd.

Sabotic scored another memorable double at Genclerbirligi and another double in a 3-3 thriller with Fenerbahce.

By the time his 3 year spell had come to a surprise end, he signed for FK Sutjeska Niksic having scored 46 goals in 85 games for Ankaragucu, he had adhered himself to the Ankaragucu fans as one of their favorite sons.

If you go back and watch videos of Ankaragucu games on youtube or daily motion between 1990-1993 you will see both Sabotic and Sinan and the quality they added to the team. Sabotic had fantastic technique and ability, but his finishing was his top quality, scoring goals from all distances and angles and having the ability to make space for himself.

Surprisingly you wont find many articles on his time in Turkish football or even hear him mentioned by the Ankaragucu fans. Hopefully this article will raise a few memories of our older Ankaragucu fans who can share their stories. Having a player of Sabotic talent today would cost millions of pounds.

Despite having two top quality players in Sead Sabotic and Sinan Engin, Ankaragucu finished 7th and 8th in the 3 seasons the Bosnian striker played for the club. Results were at times excellent, beating and drawing with the Istanbul teams, to just awful where they would lose 7-0 and 8-0 on a couple of occasions.

The Bosnian did return to Turkey with spells with Polatlispor and Bayrampasa before he retired, but his time at Ankaragucu was the most successful of his career.
By Nady - October 17, 2018