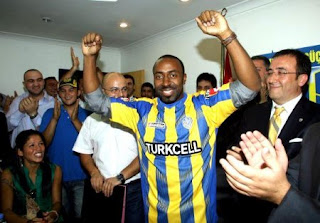 Darius Vassell returns to Ankara this weekend 8 years after he left the club under difficult circumstances in what he could be forgiven for never wanting to return to the city. The former England international made headlines when he signed for the club back in 2009. Over 3000 Ankaragucu fans turned up to Esenboga Airport to meet their new hero and ultimately their hospitality sealed the Englishman's signature.

After a promising start scoring on his debut, Vassell was in and out the team due to injury. Once fully fit the club had been taken over by Melih Gokcek and thats when things started to turn sour. Kicked out of his Rixos Hotel in the middle of the night due to the club not paying the bill, his wages not being paid and the Gokceks bringing in their own players, it signaled the end of his Ankaragucu career after only one season. Vassell scored 4 goals in 22 games for the club but is still a fans favorite due to his 100 percent effort on the pitch and his relationship with the fans.

Vassell has always spoke positively about the club and fans and Mehmet Yiginer agreed a deal to pay Vassell his owed wages a couple of years ago. He has stayed in touch with the fans through social media and has accepted their invitation as a guest for this weekends game against Kayserispor.

Im sure Darius will get an excellent ovation from the fans and will have a great stay back in the Capital city.