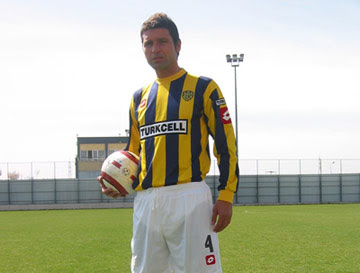 Image above taken from Blog Sport

As Discussed with the members of The Round Ball in Ankara, I will be doing a Player Profile on the Blog every couple of weeks. The reason for this is simply because I think it is important to remind the players from the past and what they have done for our Club. It also gives us all a chance to Discuss our memories of our favourite Ankaragucu players.

The first player profile had to be someone special, and after speaking with Harun, there was only one player who it could have been. Step forward Ex Ankaragucu Captain Hakan Kutlu.

In the Modern day football, we have Players been paid Hundreds of Thousands of pounds every week, playing with different clubs every couple of seasons and there main aim is to make as much money as possible. The same can not be said of Hakan Kutlu, a remarkable 28 Seasons he spent as a player with Ankaragucu from the Youth team to the First team.

Hakan made his debut for the club in the 1992/93 Season. Vetran defender Bahattin Gunes was coming to the later stage of his career while 20 year old Kutlu was making the break through from the youth team as his replacement. Little did we know that he would go on to be Club Captain making 244 appearances scoring 3 goals. Hakan had offers to move to other clubs but stayed loyal to the club he Supported.

Ankaragucu had mid table finishes and relegation battles which Kutlu played a big role in keeping the club in the Super Lig. The highlight of his time at Ankaragucu was in Season 2000/01 and 2001/02 where he lead the club to 6th place and 4th place respectively. This ensured European football in the later season which would see Atletico Madrid visit Ankara.

Hakan Kutlu was your no nonsense type of defender who gave everything when on the park. Not the greatest in terms of natural ability, but he made up for it in other ways which made him a Fans Favourite and Legend with the Ankaragucu fans.

One story Harun told me which Summed him up, Ersun Yanal who was Ankaragucu manager agreed to take charge of Genclerbirligi. The Ankaragucu fans were angered by this and Genclerbirligi were said to be the Dream Team. When both teams met Ankaragucu won, after the game Hakan Kutlu took an Ankaragucu Flag and ran to the Centre Circle and Stuck it on the Park. Sorry Gencler fans but that is the Making of a Legend.

Kutlu brought an end to his Playing career in the 2006/07 season. But his time at Ankaragucu didnt end there. Kutlu became manager and lead the team to a very good 8th in his first season. The second season didnt finish as well as we finished 13th before been replaced by Hikmet Karaman.

After Ankaragucu, Kutlu had short spells as Manager of Denizlispor and Manisaspor. At the moment he is without a club. He enjoyed a wonderful career at Ankaragucu and it is doubtful we will ever see such loyalty again in this day and age. He has given so many memories which I hope the Round Ball in Ankara will join in and tell there memories of him. Thank You Hakan Kutlu