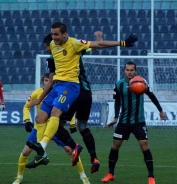 Before todays game had started Kayseri were the overwhelming favourites, Ankaragucu rooted to the bottom of the league whilst Kayseri are involved in the promotion places. At the end of the match Ankaragucu will be wondering how they came away empty handed. Mustafa Kaplan summed it up perfectly at the end when he said their experience saw them take advantage of the things Ankaragucu failed to.


The team lined up with a 4-5-1 formation with Timur up front on his own. Serkan, Kaan and Gokhan would supply the support from midfield. At the back Gurkan replaced Umit Kurt who signed for Sivasspor, whilst Enes Kubat came in at right back and Aytac moved to left back.

The 19 Mayis stadium was empty due to the stadium ban, although there were about 40 women and children who made it into the stadium. Its difficult to tell before a match just what kind of influence an empty stadium can have on the players.

4 - Nice play from Kaan Kanak as he rides two challenges before finding Aytac who shot wide of the post.

9 - Kayseri had the ball in the back of the net but the referee rightly ruled it out for offside.

13 - Mistake at the back from the Kayseri defence allowed Timur through on goal, he decided to take the shot from just outside the box but fired wide of the post with Atilla scrambling across.

21 - Half chance for Timur as he headed well wide from a Serkan cross.

31 - Ankaragucu take the lead, and what a fantastic goal it was. Serkan flicked the ball inside fro Kaan, who took a touch before lobbing Atilla to make it 1-0. Brilliant piece of individual skill from Kaan which he is capable of.

43 - A nice move from Kayseri which has the Ankaragucu defence all over the place finds its way to Gerrard Gohou whose shot came back off the cross bar with Bayram having no chance.

A good first half performance from Ankaragucu with the defence keeping things tight at the back. Gurkan was doing a good job replacing Umit and Enes looked comfortable at right back.

61 - Ankaragucu look to get back in the lead as Aytac closes down Ragip in the Kayseri box, but the defender gets back to block Aytac shot.

66 - Kayseri should have taken the lead as Emrah got on the end of a Bilal Aziz header but he sends the ball wide of the post.

67 - Nice break from Ankaragucu as Bilal finds Timur whose cross finds Gokhan who miss hit his shot at the back post. Unlucks as the Kayseri defender got a touch to put Gokhan off.

78 - Bilal blasts over from a Gokhan lay off.

79 - Serkan's corner into the box is headed back off the crossbar from Gokhan Erdogan.

87 - Excellent ball from Serkan plays in Timur one on one with Atilla but he shoots straight at him. Golden chance to win the game.

88 - This time Hasan plays in Timur again one on one with Atilla but somehow he shoots at the side netting. Two glorious chances to win the game.

89 - Kayseri go up the other end of the park as Gohou plays in Emrah who goes past Gurkan and makes no mistake by slotting the ball past Bayram. The Ankaragucu players looked devastated.

90 - Gerrard Gohou has the ball in the back of the net again but ruled out for offside.

93 - One last chance for Ankaragucu as Umut Nayir heads the ball on for Enes but Atilla collects the ball.

94 - A brilliant counter attack as Hanni plays in Emrah for his hat trick and finishes the game at 3-1.

A harsh lesson for the Ankaragucu players as they should be celebrating 3 points. The only way Ankaragucu can survive now is if the transfer ban is lifted this coming week. Mehmet Yiginer spoke after the games saying 4-5 players are wanting what is owed in full and that is what the hold up is. He said it needs to be lifted though.

Next up is Adanaspor away, lets hope Ankaragucu have a host of new players ready to play and take 3 points before it is too late.

Man of the Match - Volkan Geyik