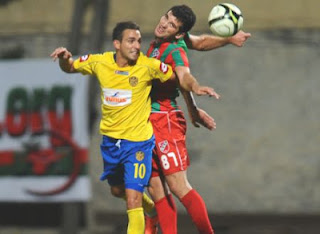 A 6 goal thriller in Antalya today as Ankaragucu drew 3-3 with Hatayspor. Goals came from Bilal Gulden, Gokhan Erdogan and Timur Ozgoz. Thats 8 goals in the last two games for Ankaragucu but those defensive problems are still there and need to be addressed.

In other news, It is still unclear weather Mehmet Yiginir will be come President of the club at Sundays congress. He has still not received the backing from Melih Gokcek although a meeting has been scheduled for Sunday morning according to Klasspor.

The transfer ban is no closer to being lifted, intact just today it was said that the management team have come up against a few problems and need more money than expected to lift the ban. Also Baba Diame has left the training camp in Antalya and has flown to France to sign for a French team. Muhammed Turkmen has also had his contract canceled by the club.
By Nady - January 09, 2013