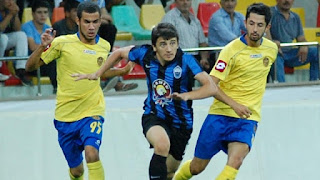 Its back to football this Sunday after the 3 week winter break as Ankaragucu host Kayseri Erciyesspor at an empty 19 Mayis Stadium. The match will be the first of the 5 match stadium ban the club has due to the crowd trouble against Konyaspor. It looks like the team will go into the match with no new faces as to date the transfer ban hasn't been lifted.

Both sides met on the first day of the season in Kayseri where Ankaragucu took the lead through Timur. Ankaragucu looked comfortable until Timur was wrongly sent off for an apparent elbow. Second half goals from Mehmet Ayaz and Gerard Gohou gave Kayseri Erciyesspor the three points against 10 men Ankaragucu.

Since then Ankaragucu have struggled at the bottom of the table whilst Kayseri are involved in the promotion places. Sitting second in the league they have hit a bit of a sticky patch of late with 1 win from their last five games. The game is a huge game for both sides for different reasons, Ankaragucu cant afford to lose any more ground on the teams above them.

Ankaragucu have lost two key players over the winter break. Umit Kurt signed for Sivasspor and Sinan Kurumus completed a shock move to Besiktas. Their replacements will be Gurkan Alver who will move into defence to partner Volkan Geyik, whilst Umut Nayir will replace Sinan. Some of the A2 players will be promoted to the first team as well.

Unless the new management team can lift the transfer ban, it will be impossible to avoid relegation. During the winter break the defence showed the same problems by conceding  to many sloppy goals. With Umit gone, the likes of Timur, Mert and Bayram will be called upon for their experience.

The game will be shown live on Sunday from 2pm Turkish Time, 12pm UK time on TRT Web TV. Lets hope the team can take the three points !
By Nady - January 15, 2013