I was just a few minutes late to the Beer Bus and as I was walking in one of the waiters was already jumping up and down. "Iki, iki, iki," he shouted. I never know who these waiters support, most of the time people here seem to support the big three, and so I went inside to see that just five minutes in and Gencler were two up.

I walked inside and was given high fives from everyone as if I had personally scored the goals. So, five minutes in. We are two-nil up. I can probably enjoy this match. And what a wonderful match it was. Gencler at times were sublime. At other times they were pretty crap. But it was one hell of a match and hats off to Antalya as they never gave up.

Before I had arrived, our new signing Bjorn scored the first... then he scored the second. I showed up and then Sir Eski Kanka Jim's favourite player Murat Duruer scored for Antalya off a fairly dodgy free kick. It was a good goal though and well....

It was then a bit of a ding-dong affair until Bjorn seemed to have scored again. Instead, it was an own goal but it didn't really matter as he scored again later on. All up, it was great stuff from Gencler. It was also great stuff from Antalya as the second half was all end-to-end action. Bjorn ended up getting four goals. He is surely our new hero. 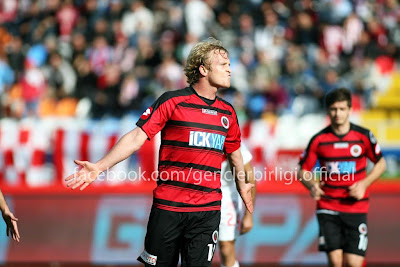 You are allowed to take the piss after scoring
three goals. After the forth, you can just laugh at them.
By Oz Kanka - January 20, 2013