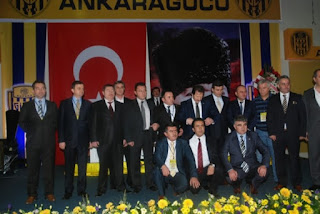 Mehmet Yiginer became the 47th president of Ankaragucu today as he received 480 votes from the delegates who also attended. A crowd of over 500 fans gathered outside the Tandogan facility awaiting the news they were all wishing for. It was only last month that Atilla Suslu brought Mehmet Yiginer a friend of Melih Gokcek to the table.

There was good news straight from the start as it was announced Cemal Aydin has been removed from the club as Honorary chairman. The man responsible for the near death of Ankaragucu is finally gone. Yiginer also spoke of the great history of Ankaragucu and asked for the help from the Ankara community to get behind the club.

In regards to the transfer ban, there is still a bit to go but they think it is possible to remove the ban. Atilla Suslu will stay on as part of the management team and also part of the team will be Abdullah Karaata. This is a small step for Ankaragucu on a long road back to recovery. It will be interesting to see the next steps of the new management team.
By Nady - January 13, 2013