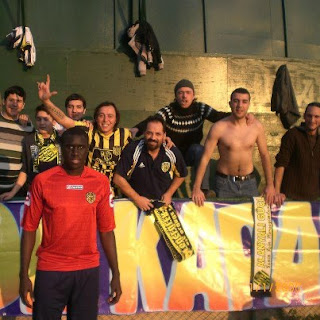 Ankaragucu took on Bucaspor in their second winter break game today in Antalya. Sol Kapali were there to cheer on the team and there were also members of Avrupali Guculer. The game ended 5-2 to Ankaragucu with the goals coming from Umut Nayir, Mert Erdogan, Furkan Guraslan, Bilal Gulden and Timur Ozgoz.

I found out a bit more about Baba Diame the French player we have on trial. He is of African descent and has been playing with Alcoron B team who are a Spanish first division club. He plays as a striker and as you can see from the picture above is a big powerful lad.

Damon sent me a link from Sporanki today which claims the club will name all its members as it looks to be more transparent in the running of the club. Mehmet Yiginir is also at the clubs training camp in Antalya and handed out one thousand Turkish Lira between the players.
By Nady - January 06, 2013