Ankaragucu is the One...

Ok, I confess, I tampered with Australian actor Hugo Weaving's (Agent Smith) lines a bit, and I'm playing both sides of the movie (plus I added a bit of Highlander [as a tip of the hat to Eski Kanka]), but, hey, why not? 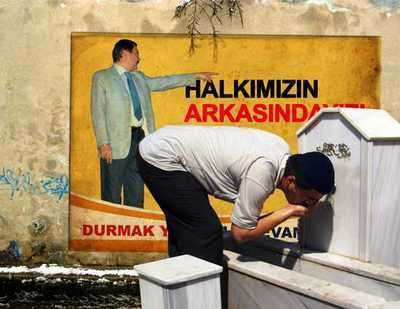 "We stand behind our people!" says Melih in a campaign poster captured in an uncredited photo that has been circulating on the internet since slightly before the last local elections.

So what does The Matrix have to do with Ankaragucu? Well, the above was very similar in tone to what Melih Gokcek had to say this past week as captured in the paper Hürriyet. “The age of the three great teams is coming to an end; the age of the one great team is coming...Ankaragucu in the very near future will be that one great team.”

He actually had a lot to say that day, but, in a nut shell, he basically explained that as someone from Ankara, the fact that Ankara is the lone capital city that has not produced a championship caliber team is a great disappointment to him, and it is for this reason that he has worked so hard to help Ankaragucu. He pointed out that initially he was thwarted from this goal by Mesut Yılmaz (Prime Minister in the 1990s) who accused him of wanting to use the team for political reasons (hmm, I wonder why?). Later Gokcek claims to have tried to help Gencler Birligi by pleading to Cavcav to hang on to his good players instead of sending them off in all directions, but to no avail. He then tried to succeed with Ankaraspor, and professes to have done a great job, but admits to having fallen a bit short because the team had no supporters (here at the blog we can certainly attest to that having outnumbered them at every match—at their stadium).

Morpheus: But where they have failed, you will succeed.
Gokcek: Ankaragucu is the one.

We’ll have to see, but things don’t look so promising at the moment. Gucu are up to their ears in debt, just had their team bus repossessed, got that back, and then had a servis vehicle repossessed. On top of that there is the money (a million Euro probably plus any accumulated interest) they have to pay Boluspor for Gokhan Emreciksin. I ask you, if you can’t even keep your bus from being repossessed…Well, you get the picture.

Like I said, we’ll just have to see.
All those claims are well and good, but for Ankaragucu to win the Superlig will be more difficult than it was for Obama to win the Nobel Peace Prize: concrete results will be needed.

We shall see whether those results will be forthcoming.
By Battle Damaged Kanka - October 12, 2009