It is all kicking off at Genclerbirligi with news spreading fast of an act from the deputy chairman of the club that if he has any dignity at all he should resign immediately.

Genclerbirligi Deputy Chairman Tarik Artukmac was caught during the live broadcast of the Fener-Gencler match as giving a high-five to one of the Fener directors after Fenerbahce scored their second goal against us. The man was apparently happy that a goal had been scored against his own team. 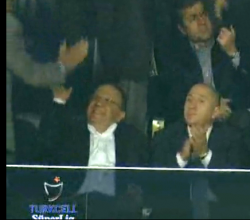 We in Ankara have to deal with all the Istanbul supporters but even if we don't like the directors of our clubs, the least we can expect is that they actually support us and not the opposition.

Uproar has ensued on the Gencler forums (fora for you Latin types) as news of Artukmac's actions spreads. The bloke has form. In 2006 for some reason or another he was on the private jet that brought Roberto Carlos to Turkey to play for... yep... Fenerbahce.

At the time he denied any involvement in organising Carlos' transfer from Real Madrid but I can't find any real explanation from him why he happened to be on that private jet. Maybe he was just hitching a ride back home.

"Apart from Genclerbirligi I haven't supported any other team and I still don't," Artukmac was quoted in the press at the time of the Carlos scandal. Mmmmm... right

Then just to add irony to the farce is news that Mehih Gokcek is going to use Artukmac's actions as a defence when he rocks up to try and wriggle Ankaraspor (and presumably his son Ankaragucu chairman Ahmet) out of the various bans they have been imposed with recently.

Artukmac has lost the support of the Gencler fans. At Gencler's next home match in two-weeks time expect the protests to be long and loud.

As the headline on the Alkaralar site says: "Yönetimde İstanbul Çocuğu İstemiyoruz!"
By Oz Kanka - October 06, 2009