Fun in the sun

Spring finally arrived on Sunday and with nothing at stake in the Genclerbirligi - Konyaspor match the smallish crowd were in party mode. At one stage someone even produced a guitar, the crowd went silent as the first chords of various songs were played and then the whole of Maraton sang along, including a particularly rousing rendition of our version of "Bella Ciao", the anti-fascist Italian partisan song. All this was while play was proceeding. It wasn't a great match, but it wasn't bad either and Gencler deserved their the victory.

Mothers' Day on Sunday and we prepared a big brunch for various relatives at Chateau Kanka. When I say we prepared a brunch, I mean, I went for a walk with Little Oz Kanka to go and get our car from where I had left it the previous night after having one or two drinks.

Brunch done and Mrs. Oz Kanka sprawled herself on the sofa while Little Oz Kanka started pestering her to take him to the cinema. I offered to take Little Oz off to the football. He wasn't too keen until Mrs. Oz shouted "Please, it is Mothers' Day. Please go to the football."

And so, out of the kindness of our hearts we headed off to the Beer Bus congratulating ourselves on such a public display of our love of Mrs. Oz.

Peep, peep, peep, and Gencler came out well. Some nice attacking football, some terrible offside decisions being given against us and six minutes in we had our first chance when Oktay (I think) hit the post. Konya's defence was pretty rubbish and we should have gone up earlier then we did but Zec seemed to be completely out of form.

We were missing shots or they were being saved and then finally in the 41st minute Yasin capitalised on a mistake in defence and fired from an angle for a great goal. The only thing is, it looked pretty clear from where we were sitting that was from an offside position. The chants went up praising the assistant referee for giving us an offside goal.

The goal we conceded was due in no small part to a complete and utter lack of concentration. Konya had a corner and the Gencler players were simply not ready, some with their backs to the ball not realising that the it was in play. Somehow the ball made it into the box and it fell to a Konya player who stuck it into the back of the net. An utterly stupid goal to concede. 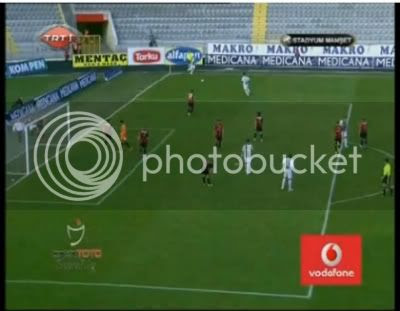 In this screen grab from the video below you can see that the ball is already in play, two Gencler players, plus the goalkeeper have their backs to the ball, another is bending over trying to get his breath back.

Luckily the crowd didn't really care and went on singing and generally having a good time when our winner came thanks to about the only half-decent thing Zec did all match when he passed to Oktay who smashed it past the keeper.

All up a great day in the sun. This week we have Galatasaray on Saturday night. Should be a fun night.