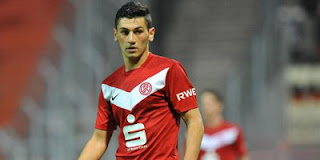 The Ankaragucu facebook page today confirmed that three trialists have joined the clubs training camp in Antalya. The team will spend the winter break in the golf resort in Belek while staying at the Arcadia hotel.

French striker Baba Diame along with 2 German born Turks Kerim Avci (pictured above) and Furkan Guraslan joined the rest of the team today and Diame will stay with the club for the next month. The french striker Diame is an unknown quantity but likely to come from African origin.

Kerim Avic is playing with Rott Weiss Essen in the German regional league and is a 23 year old  attacking midfielder. Furkan Guraslan is 24 years old and also plays in midfield. In recent years there have been a lot of success for Turkish teams signing German born Turks from German lower leagues.  Three years ago Ankaragucu had Cenk Tosun on trial before he signed for Gaziantepspor. Ankaragucu have also had success with Timur Ozgoz and Ishak Dogan.

Its going to be a busy January in terms of rumours and players coming and going, but it all counts for nothing if we cant lift the transfer ban. A bit of good news tonight as Ankaragucu will receive 55 thousand Lira due to Gokhan Akkan playing with the Turkish National youth team. Well done Gokhan !
By Nady - January 03, 2013