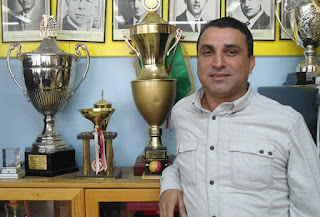 
President Atilla Suslu today held a press conference to discuss the financial crisis at the club. Thanks to Damon who translated the points raised by our President.

* Has asked for another 15 days to pay the bank money owed for the Roman Bednar loan deal from West Brom. Failing this the club will receive a 6 point penalty deduction.

* Has claimed that former staff like Hakan Kutlu and Nazmi Bonhoff aren't helping the club in their efforts to lift the transfer ban as they are asking to be paid the money they are owed.

* Will remove Cemal Aydin as honorary president of the club

* Has opened up membership for everyone at 1050 Turkish Lira, but it will be closed at end of December so is urging everyone to join now

* Debts for players wages such as Umit Kurt, Bilal Gulden and Gokhan Akkan still to be paid

Some interesting points brought up, the biggest one for me is removing Cemal Aydin from the club. As Damon mentioned on facebook tonight, how can you trust these men with your money otherwise we would all become members ?