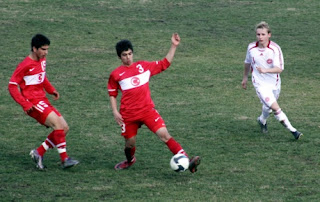 Ankaragucu youngster Emre Tasdemir tonight signed for Bursaspor in a deal worth 500 thousand Turkish Lira. The 17 year old left back has had glowing reviews since breaking into the Turkey under 17 National team. It was only a matter of time before Tasdemir broke into the first team, but a move to Super Lig side Bursaspor was to much to turn down.

With the January transfer set to open in a couple of weeks, talks of Ankaragucu players such as Umit Kurt, Timur Ozgoz, Mert Erdogan and Gokhan Akkan moving to Super Lig sides have all been discussed, it is a bit of a surprise that the first player to go is a player who hasn't even played a single minute of first team action for the club.

The money raised from the sale will come in handy and hopefully that money will go to the first team players wages after all their hard work which see the club still in with a chance of survival.