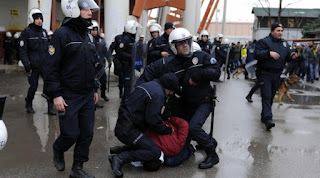 In the last hour the Turkish FA have announced Ankaragucu will be handed a 5 match stadium ban and a 20,000 Turkish Lira fine for the crowd trouble at the weekends game with Konyaspor. That means the games against Kayseri Erciyesspor, Karsiyaka, Sanliurfaspor, 1461 Trabzon and Adana Demirspor will all be played behind closed doors. The first match back at the 19 Mayis Stadium in front of fans will be on 6th April against rivals Goztepe.

I suppose you cant argue with the punishment as some of us expected up to 10 matches. It will be a huge blow to the team though having to play their next five home games without the backing of the fans. In todays other news, according to Klasspor Melih Gokcek has dismissed Mehmet Yiginir's plea for help but saying he is finished with Ankaragucu and would not urge anyone to become a candidate. There are now 300 new members of the club with Mehmet Yiginir bringing in 100 of them.

Atilla Suslu also confirmed the club are still hoping to keep hold of Timur Ozgoz and Umit Kurt with clubs from the Super Lig interested in both players. It is believed Sivasspor want to sign Umit Kurt whilst Genclerbirligi are interested in Timur.