Serkan Sirin and Orhan Evci dropped to A2 team ! 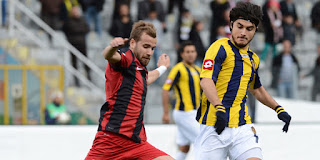 According to Sporyolu Mustafa Kaplan has tonight dropped both Orhan Evci and Serkan Sirin to the reserve team due to behaviour and discipline problems. Both players have been out of favour of late and its unclear as to what has led to this decision.

Orhan who played at right back at the start of the season before being replaced with Aytac Oden, has struggled to get back in the squad after a string of disappointing performances. Serkan Sirin is a player with a lot of ability but has become lazy and inconsistent of late.

Both players were amongst the players mentioned to be leaving the club due to unpaid wages, and it remains to be seen if their behaviour issues are connected. One thing is for sure, Ankaragucu cant afford any disruptions off field at the moment and if these two want to get back in the squad they need to get their heads down and fight for their place.
By Nady - December 05, 2012