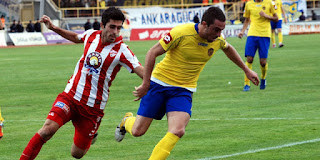 Ankaragucu have now taken the lead in their last three league games only for the score to finish 1-1 in each of the games. Another spirited performance today with yet another big refereeing decision that went against Ankaragucu.

Before the match started i spoke to Timur Ozgoz, the 25 year old German striker who has arguably been the stand out player this season for Ankaragucu. He spoke of his disappointment of loosing Wednesday nights match at Besiktas but the team were now focussed on winning at Boluspor.

There were a few changes in the Ankaragucu team, with Bayram injured he was replaced with Gokhan Akkan. Captain Mert was suspended so his place was taken by Gurkan Alver, and finally Teoman replaced Gokhan Erdogan who was dropped to the bench.


Boluspor started the match the stronger, they passed the ball well while Ankaragucu struggled to get a hold of the match in the first 10 Minutes. The first chance of the game came for Bolu when a shot from just outside the box came back off the crossbar with Gokhan beaten. Then came the first goal of the game, Ankaragucu won a free kick which was taken by Kaan Kanak, the midfielder floated an excellent cross into the box for Sinan who rose to head the ball into the top corner. 1-0

The Ankaragucu fans who turned up in their numbers were delighted and were even praised by the commentators on TRT for their incredible support. 21 Minutes into the match a lovely cross by Ergin met the head of the giant Serge Dijehoua but it was straight at Gokhan Akkan. Two minutes later another excellent corner from Kaan which Sinan got on the end of, but his header went inches above the crossbar when he should have scored.

That miss would come back to haunt Sinan, as a few minutes later Bolu equalised. Ali Guzeldal shot from 25 yards into the back of the net, maybe Gokhan should have done better but an excellent strike from Ali none the less. Gokhan redeemed himself 36 mins into the game, Guzeldal found Aziz in the Ankaragucu area who turned and blasted his shot, but a fantastic save from young Gokhan Akkan kept the scores level. Bolu had another half chance before half time after a mistake from Gokhan but the Ankaragucu defence managed to help their goalkeeper out.

Ankaragucu made a change at the break with Enes replacing Teoman. The TRT stream was very poor in the second half but i still managed to keep up with the game. Ali Guzeldal and Kaan both had half chances within the first few minutes of the half. Kaan should have maybe passed the ball to Timur who was in a better position. 64 Minutes in and Bolu hit the woodwork again, another excellent shot which came back off the post. Playing in the midfield today for Boluspor was former Ankaragucu player Barbaros Barut, a player that was linked with a return to the club in the summer.

Gokhan Erdogan came on to replace Bilal and making his debut was Bilal Gundogdu who replaced Gurkan. Gundogdu is another player who has come through the Ankaragucu youth academy. Gokhan Akkan made another good save this time from Dijehoua and looked to have injured himself in the process.

Then came the talking point of the match with minutes remaining, a Gokhan Akkan goal kick found its way to Timur Ozgoz, the striker showed his pace before rounding the goalkeeper and placing the ball into the back of the net, one of the Bolu defenders in the process tried to clear it off the line which the referee thought he had. Replays showed that the full ball crossed the line.

How many games this season have we come away from when referee decisions have went against us ? Ankaragucu should be sitting comfortably at the moment instead they find themselves rooted to the bottom of the league. New manager Mustafa Kaplan now makes it 3 draws from his 3 games in charge. Next up is a home match against high flying Caykur Rizespor next Saturday afternoon. There is no doubting Mustafa Kaplan has made a difference since taking charge. Lets hope he gets his first win next week.
By Nady - December 01, 2012