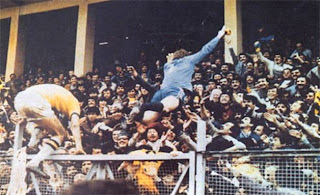 Ankaragucu travel to Bolu tomorrow to take on Boluspor in the Turkish PTT Lig. It is difficult to tell if Wednesdays match at Besiktas will spur Ankaragucu on or weather it has dented the players confidence after going so close to causing a big upset in Istanbul. The match between Ankaragucu and Boluspor has an interesting history dating back to 1981.

Boluspor are sitting mid table at the moment and are still in with a chance of a play off place, but could also be dragged into the relegation battle. They have enough quality in their side including Serge Dijehoua, Akeem Agbetu, Iskander Alin and former Ankaragucu goalkeeper Serdar Kulbilge. The later signed for Ankaragucu last summer from Genclerbirligi but didn't play a single game due to his alleged involvement in match fixing during his time at Gencler.

If the home side play to their full potential they could prove to be to strong for Ankaragucu with the quality they have in their squad. A good 3-1 win at Sanliurfaspor last week will give them some confidence in what has been a start stop season so far.

Ankaragucu can take confidence from their performance mid week during Besiktas, and if they play to that same level there is no reason why they cant return to Ankara with the three points. Timur Ozgoz, Umit Kurt and Kaan Kanak are all in excellent form and will be again called upon for their big performances.

History has been good to Ankaragucu in this fixture as the picture above shows when winning the cup, lets hope tomorrow it repeats itself with 3 points.
By Nady - November 30, 2012