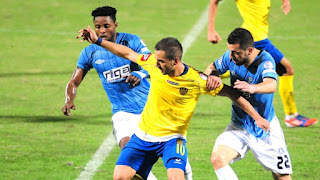 Two teams struggling at the foot of the Turkish first division meet on Sunday at the 19 Mayis stadium in Ankara. For both Ankaragucu and Tavsanli this will be their biggest game of the season so far. Tavsanli travel to Ankara coming off the back of two heavy defeats against Sanliurfaspor and Manisaspor, while Ankaragucu have lost to the likes of Bucaspor and Adana Demirspor.

For 60 minutes of the match on Sunday at Adana, Ankaragucu looked like they could go on and win the match but as said in the match report the home side were just too strong. Mert Erdogan has been a huge loss in the middle of the park and it looks like he will miss the match this weekend to. Muhammed Turkmen played another 90 minutes as he looks to gain match fitness after a long time out with injury.

Its hard to criticise this young Ankaragucu team, after all they stuck with the team during its darkest hours all while not being paid. But some of the players need to learn from their mistakes and up their game. Bilal Gulden, Mehmet Tasci, Hasan Ayaroglu have struggle of late, but if they can get their form back they will all be big players for the club.

Tavsanli must not be underestimated, like any team in this league anyone can beat anyone. With the home crowd behind them though Ankaragucu can get that all important win that they are looking for. Kick off will be 2pm on Sunday Turkish time.

In other news, Cemal Aydin will face trial on 18th of December and could face up to 7 years in jail. From the media outlets I couldn't quite work out what the trial was for, but lets hope the Turkish justice system sends this criminal to the place he deserves in a cold, dark Turkish Jail.

The other clown involved in the downfall of Ankaragucu Melih Gokcek said on twitter last night that Ankaragucu will fall to the amateur leagues. Like that wasn't obvious Melih after all you made this happen, along with your son, Cemal Aydin and the rest of the thief's who have made money from this club.
By Nady - November 08, 2012