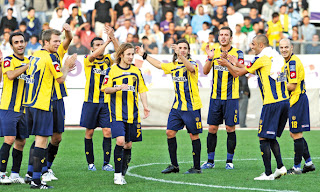 There has been a lot of talk the last couple of days on the Ankaragucu facebook pages and twitter pages regarding the future of the club. As the weeks go by things are getting a lot more difficult for the club to pay any debts, players wages or even finish the current season. Only last Saturday new president Atilla Suslu confirmed the club have had enquires about 5 of our players, and that it could raise much needed cash.

With current debts at 80 Million Turkish Lira and the club facing a 12 point deduction if the Roman Bednar debt isn't paid by 26th of November, its difficult to see any way out of this mess for Ankaragucu. A club destroyed by Cemal Aydin and the Gokcek family in the opinion of the fans. Who is going to come in to a club and take on all those debts ? Turkish footballs rules don't allow foreign ownership, so there will be no arab or russian billionaires coming to save the club.

If MKE Ankaragucu are to survive, they need investment and to clear this huge debt, the club also need to find a way of removing Cemal Aydin with rumours saying his time will come to an end in July 2013. With Ankaragucu A.S, it will mean starting again, the history can be transferred as a newco the same way it has with Rangers. It will be the same club, just that the company name will change. There would also be no debt to pay and it would be a fresh start.

The problem with Ankaragucu A.S is that if the Gokceks are to come in then it will split the fans. You will have the likes of Gecekondu supporting MKE Ankaragucu and Anti X will follow Ankaragucu A.S. This is the last thing the club need, we cant afford to loose half our support. What the fans need to remember, is to follow the club and not the money. If Ankaragucu go to the amateur leagues we will follow on, rather than fund the Gokceks who are a big reason we are in this position in the first place.

It will be interesting to see how things develop, with Ankaraspor back in the Turkish Super Lig next season what will the Gokceks next move be ?