Ankaragucu face Besiktas in next round of Turkish Cup ! 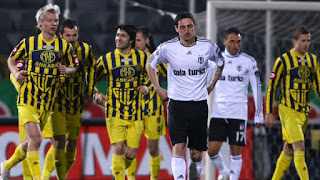 Ankaragucu were today drawn away to Besiktas in the next round of the Turkish Cup. Mustafa Kaplan spoke today saying the club were happy with the draw and the young players will give everything in the match to try and win the game.

According to Klasspor, Ankaragucu fans have been banned from traveling to Izmir for tomorrows match due to security measures. Both teams have a heated history so the game will be played in front of home fans only.

As reported on here the last couple of days things have gotten a lot worse at Ankaragucu with the club finishing the season in doubt, Mustafa Kaplan admitted we have received offers for 5 of our players who could leave in January. Umit kurt, Mert Erdogan, Bayram Olgun, Timur Ozgoz and Serkan Sirin will be the top targets.

Good luck to the players tomorrow in Goztepe, remember to tune into TRT Web TV who are showing the game live at 1600 Turkish Time.

In other news tonight, according to twitter and the official Ankaragucu Facebook, Ankaragucu have until the 27th of November to pay £140,000 debt for Roman Bednar's loan deal or the club will be deducted 12 points. If the club don't then pay further debts on 16 December they could face demotion to  Lig 2.
By Nady - November 16, 2012