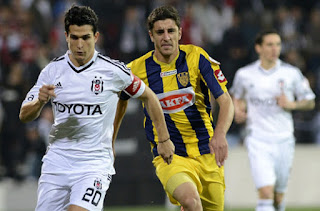 The young lions of Ankaragucu were left with broken hearts at full time tonight as Besiktas won 3-2 scoring the winning goal with 5 minutes to go. Before the game had kicked off the home side were expected to win comfortably, after all the Super Lig side with their international superstars were up against a young Ankaragucu side who have won 1 league game all season and cant pay their players.

These young Ankaragucu players can head back home to the Capital with their heads held high and be proud of an excellent performance tonight in Istanbul, and credit to manager Mustafa Kaplan who set up the team with his usual 4-4-2 formation.


You will be glad to here that Ankaragucu took to the field on time and there were no delays in kick off despite Atilla Suslu claiming all week that the team would enter the field 15 minutes late in protest against the Turkish FA. Instead 11 young men representing the club they love took to the field and fought for 90 minutes producing their best performance to date.

Besiktas as expected started the game stronger, they rested some of their players like Manuel Fernandes and Alan McGregor while Hugo Almeida was suspended. The first chance of the game fell to Muhammed Demirici after Emre crossed the ball to the back post, but the youngster could only find the side netting.

It took 20 minutes for the first goal of the game, and it was the home side who went ahead. A long ball over the top which Mehmet Tasci failed to deal with found its way to Filip Holosko, the big striker was to strong and held off Umit Kurt before firing past Bayram. 1-0 Besiktas.

After the Besiktas goal, Ankaragucu stepped up a gear and started to close down every ball as well as get the ball forward to Sinan and Timur. Bilal Gulden played a lovely ball through for Timur who beat the offside trap, the striker was one on one with Cenk and kept his nerve before putting the ball through the keepers legs to make it 1-1. A fantastic goal and great finish from Timur.

Five minutes later and the Ankaragucu fans were on their feet again, another through ball which Cenk came out of his area and punched the ball away, the referee waved play on and the ball found its way to Kaan who lobbed Cenk to make it 2-1 Ankaragucu. The TV cameras went to the Ankaragucu bench and the substitutes couldn't believe what they were seeing.

Just before half time Bayram made some good saves from Filip Holosko, and then an excellent double save from Olcay. Half time 2-1 , an excellent first half from Ankaragucu but there were another long 45 minutes to go.

Into the second half and Filip Holosko had a chance to put Besiktas level, he outmuscled both Mehmet Tasci and Umit Kurt which left him one on one with Bayram, but Ankaragucu goalkeeper made a good save at his feet. Besiktas did get their equaliser from the penalty spot. Ugur Boral went past his man in the box, Gokhan Erdogan slid in and brought Ugur down and the referee awarded the penalty. Thomas Hilbert stepped up and blasted the ball into the top corner giving Bayram no chance.

Gokhan had a half chance to redeem himself but blasted well over from just outside the box. The best chance of the second half for Ankaragucu fell for Timur, he was put through on goal but this time he shot straight at Cenk who tipped the ball round the post.

It looked like the game was heading for extra time until Ibrahim Toroman crossed the ball in the box, it found its way to Batuhan Karadeniz who headed past Bayram to make it 3-2 Besiktas. The goal seemed to take the wind out of the Ankaragucu players and Besiktas held on and will progress into the group stages of the Cup.

Next up for Ankaragucu is an away trip to Boluspor on Saturday afternoon, if the players play to the same level as tonight they will win the game. But just how much has tonight taken out of the players ? One thing is for sure, they can be proud of their efforts tonight. Timur Ozgoz will have done himself no harm tonight with another impressive performance. His value will have risen and any team looking to sign him will surely make a move for him in January.