ANKARAGUCU - ALL OUT ENDEAVOUR WINS A POINT 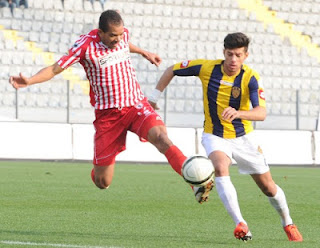 No doubting the endeavour of all the young Ankaragucu players in the team yesterday, but it could so easily have been 3 points had the woodwork not been in the way and the Samsun goalkeeper, Atilla, not been in fine form.

Having said that, I should also mention that the Samsun defence was well organised and that was to be expected from a team with one of the tightest defences in the league.

There was some doubt on Friday night that the match would take place.   Battle Damaged Kanka Damon saw some reports on the Internet that the Club 'Management' decided that the team would not take to the field in protest.   My immediate reaction was ......... a lot of good that will do !    Hand Samsun the 3 points free and then be handed a whopping fine by the TFF to add to the growing Club debts !

Anyway, we (Battle Damaged Kanka Damon, Cider Kanka John and I) decided to meet up at the Chopin Bar to assess the situation and find out if the rumour was true.   Gecikondu Bugra told us that the match was on and so off we went to the Stadium, more in hope than anything else !

We entered the Stadium 5 minutes into the match and Gecikondu was in full voice as normal.   There was a pitiful attendance in Maraton and it was the first time in my memory that Gates 7 and 8 were closed.    The 'away' end was full of Samsun boyz and I guess there was easily 3 to 400 there making their presence felt.  I should also mention that they had one of those 'love-ins' with Gecikondu in the 2nd half when they sang each others songs to each other.   Beats bad-mouthing !!

The first action of any note came in the 14th minute when Timur received a great pass, found himself in space  and fired in an unstoppable shot which was heading goal-bound.   However, Atilla was equal to it and made an outstanding save.

With half an hour gone it was pretty even with Samsun looking the more dangerous.   Ankaragucu was playing some nice footie but, not for the first time, it was breaking down in the last quarter.   Added to that, the Samsun defence was mopping everything up, especially the high balls into the area.

Then on the stroke of half time the break through came with an excellent sweeping move from Ankaragucu down the right.   Kaan crossed the ball into the area to the incoming Teoman, who had made a great run in support, received an inch perfect pass to side-foot the ball in and send us into raptures.

Perhaps Ankaragucu was fortunate to go in at half time one up, but we are thankful for small mercies these days !

Into the 2nd half and the match was being played at a fast and furious pace.   Ankaragucu was having more possession than they did in the first half and were looking likely to add to their score.

However, it was not to be.   The only mistake made by the Ankaragucu defence all afternoon was to be punished.   In the 71st minute the ball was slung over from the right but it was not dealt with.   The defending header was not accurate and fortuitously fell to a Samsun attacker who fired in a ferocious shot into the roof of the net giving Bayram no chance.

15 minutes to go and although the Ankaragucu players looked tired, they were still fighting for every ball and trying to get forward to grab the winner, and it almost came from Sinan with 10 minutes to go.   He turned his man in the box, found himself in space and fired in a shot with Atilla beaten.   Unfortunately, the ball hit the far post and rebounded to safety.    It would have been a contender for goal of the month !

The last few minutes of the match saw Ankaragucu have 2 more genuine efforts, the first being screwed wide by a miss-kick and the second saved by Atilla.

So, another point for Ankaragucu, but with the possibility of a points deduction looming, the future is not looking so rosy !

All credit to the Ankaragucu young players yesterday for their efforts.   Well played lads !