Ankara given go ahead for new stadium ! 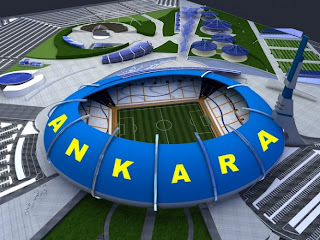 Ankara were yesterday given the go ahead by prime minister Tayip Erdogan to start building a new 40,000 seated stadium. It has been discussed for many years that the capital city should have a modern stadium like Istanbul, Bursa, Kayseri and other Turkish Cities.

The project will be headed by both foreign and Turkish architects and the location will be at the 19 Mayis Stadium. The current stadium will be demolished at the end of this season and work will begin straight after. The estimated time of construction is two years.

Some of the new features that the new stadium include transport from both train station and metro to the stadium, fitness centres, a huge under ground car park, cafes and restaurants. Some exciting times ahead, lets just hope Ankaragucu will be there to see it happen.

In other news, it has been mentioned this week that the Gokceks now have a chance of returning to the club. With membership being opened to everyone they are now able to join the club, again the said presidential elections were postponed so the club are still without a current president. The Roman Bednar money hasn't been paid by Bent Ahlat meaning the club could still face a 6 point deduction if its not paid in the coming days.
By Nady - November 04, 2012