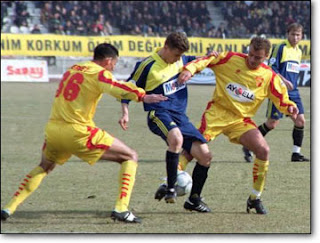 When the Turkish PTT Lig fixtures were announced at the start of the season, the game the raised a few eyebrows was Ankaragucu vs Goztepe. Unfortunately for all the wrong reasons as both clubs have a violent past dating back to when Ankaragucu played Galatasaray in a cup final in Izmir. As we all know Izmir is the city which both Karsiyaka and Goztepe come from, fans of Karsiyaka went to the game to cheer on Ankaragucu whilst fans of Goztepe cheered on Galatasaray.

Before we take a look at the weekends game some important news involving both clubs. Former Ankaragucu president Bent Ahlat has been arrested and sent to prision, Ahlat was wanted by police after being caught with firearms without a licence. News broke last night that Bent Ahlat also tried to steal 8.3 Million from Ankaragucu until new president Atilla Suslu stepped in at the last minute to block the attempt.

Goztepe coach Kemal Kilic tonight suffered a heart attack and is currently in intensive care, as much as this is a heated match between the two clubs we at the Round ball in Ankara would like to wish him a speedy recovery and send our wishes to the family. Ankaragucu have also given a contract to Bilal Gundogdu from the youth team, he was on the bench at the weekend against Tavsanli and the young midfielder will look to break into the first team.

We would also like to say well done to both Gokhan Akkan and Hasan Ayaroglu who were both involved in Turkey U18's match against Holland tonight. After all the doom and gloom over the last couple of years it is good to see these two young lads representing the club.

Back to the weekends match, Ankaragucu travel to Izmir at the weekend knowing that the clubs pride is at stake. Fans of both clubs will be expecting their team to give their all and win the match. Goztepe have home advantage but the last time the two clubs met Ankaragucu won 1-0 in Izmir. A lot has changed since then with Ankaragucu spending every season in the Super Lig apart from this season, while Goztepe went bankrupt and went to the amateur leagues.

Ankaragucu look like they are heading for the same fate as Goztepe, the amateur leagues is almost certain and the club will need to rebuild. Goztepe like Ankaragucu have had a poor start to the season, they lost at home to rivals Karsiyaka and are currently in the relegation zone. They did win 2-0 at Sanliurfaspor at the weekend though which will give them some confidence.

Ankaragucu will have new coach Mustafa Kaplan in charge of the side and it will be interesting to see if he can make any difference to the team. I was speaking to a fellow Ankaragucu fan who said he thinks Kaplan is a good appointment as he done well with the Genclerbirligi youth team and with Ankaragucu having to rely on youngsters he could be the man to take us forward.

Former Ankaragucu midfielder Theo Weeks is a member of the Goztepe squad and will be hoping he is in the starting line up to face his former team mates. Weeks is a hard working young midfielder who could cause problems but Goztepe have found it hard to score goals this season. If Ankaragucu can keep it tight at the back and take their chances up front then i don't see why we cant take the three points back to Ankara.

Timur Ozgoz is such an important player for the club, his hold up play needs to improve but his pace and movement has caused problems for most defenders he has come up against this season, he will get chances and needs to take them when they come his way.

If the game goes ahead depending on the condition of the Goztepe coach it will be on Saturday at 1600 Turkish time and will be shown live on TRT Web TV.
By Nady - November 14, 2012