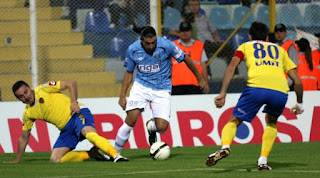 Ankaragucu tonight lost 4-1 in Adana to an impressive second half performance from Adana Demirspor. Right up until 60 minutes Ankaragucu were in the game and looked like they could go on and win it, but Adana Demirspor stepped up a gear and blew the young Ankaragucu team away.

Young Gokhan Akkan celebrated his call up to the Turkish Youth international side by keeping his place in goal ahead of Bayram. In midfield Ankaragucu went with a midfield diamond of Aytac, Muhammed and Bilal. Timur played the lone role up front and gave the Adana defence a difficult night.

The game started very open with both teams going for it, Ankaragucu first with Orhan and Timur setting up Hasan at the back post but the laters cross was knocked behind for a corner. From the resulting corner Adana went on the counter attack and could have scored had Aytac not got back to clear the ball.

Gokhan Akkan made his first save of the night when Evirgen Ercag crossed the ball which Gokhan Karba got onto the end of but Gokhan saved well. Evirgen Ercag was causing all sorts of problems for Ankaragucu down both flanks and for me has been the best player the team have come up against all season. At the other end Timur was causing problems for the Adana defence with his pace.

It must be noted at this point the Adana Demirspor fans were incredible, they made a lot of noise and the stadium was near full. They are a side that look to be going places. Then came the goal, Ercag crossed the ball Juninho and Gokhan Karba headed the ball between each other before Karba took the ball down and blasted past Gokhan. Excellent goal for Adana but the Ankaragucu defence gave them to much time and space.

Ankaragucu went straight up the other end from kick off, Muhammed Turkmen played the ball into Timur Ozgoz who turned and shot but the keeper Sener Ozkan tipped the ball over the bar. Next up was Kaan Kanak to have a go but his shot from distance was saved again by Sener.

Both teams had half chances as they push forward at every attempt, Volkan nearly headed into his own net but Gokhan saved his blushes, at the other end Gokhan Erdogan went past two defenders before shooting straight at the keeper.  Aytac was then put through on goal but he toe poked the ball straight at the goalkeeper when it was easier to score.

Into the second half and Ankaragucu started brightly, but it was Adana who nearly scored this time through a 30 yard effort from Ercag but Gokhan dived to his right and tipped the ball round the post. Adana were unlucky not to have been awarded a penalty, Juninho was tripped by Kaan Kanak in the box but the referee booked Juninho for diving.

Then came the Ankaragucu goal, excellent play down the right from Orhan Evci, he went past two defenders before picking out Timur and the striker finished superbly to make it 1-1. A deserved goal and the team looked fired up as they searched for the winning goal.

Off the field Adana fans started to throw objects at the Ankaragucu players and one fan even ran on the pitch before being escorted off by security, it looked like Ankaragucu fans were involved in a bit of trouble with the police to. Back on the pitch Adana stepped up a gear and were just to much for Ankaragucu who looked to tire. Juninho headed just by the post from an Ercag cross just before the later made it 2-1. A lovely cross from deep by Erman saw Ercag run unmarked into the box and head the ball past Gokhan.

Soon later it was 3-1, this time Gokhan tried to put Lawal through on goal but the ball was cleared only as far as Juninho and the Brazilian struck the ball into the top corner past the helpless Gokhan. Ankaragucu made a couple of subs as Serkan and Mehmet replaced Hasan and Aytac. Adana soon made it 4-1 as Juninho was put through on goal before rounding Gokhan and stroking the ball into the net.

Gokhan Erdogan was replaced with Enes Kubat, Ankaragucu had one last chance when Bilal played in Timur who shot into the side netting. Full time 4-1 Adana Demirspor.

A tough lesson for this young Ankaragucu side who now face the impossible task of avoiding relegation. Up next is Tavsanli at home who are also struggling. Nothing more than 3 points will be acceptable.
By Nady - November 04, 2012