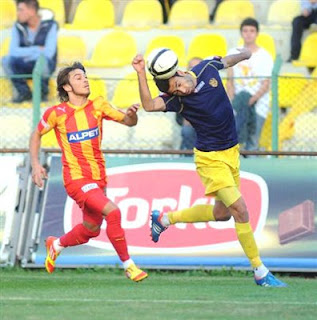 Ankaragucu can thank Bayram Olgun for his man of the match performance at Goztepe as he helped the team bring back a point to the capital. It was Mustafa Kaplan's first match in charge and he knew he couldn't afford to loose at rivals Goztepe.  He started the game with a 4-4-2 formation with Sinan Kurumus joining Timur up front.

The atmosphere in Izmir was excellent as the home fans looked to cheer their team onto victory and it was only a few minutes in when they had the first chance, a cross to the back post saw Hamza unmarked but he volleyed wide of the post.

The first chance for Ankaragucu was a half chance for Kaan who shot from just outside the box but his shot was easily saved by Ferhat. Minutes later Goztepe nearly took the lead, a cross into the box but the striker headed just wide with Bayram beaten.

Ankaragucu were struggling to get into the game, but then came the goal against the run of play. Excellent play down the right by Gokhan who crossed into the box for Sinan whose header was some how saved by Ferhat, but Kaan placed the ball into the back of the net from the rebound. 1-0 Ankaragucu.

And thats how it stayed to half time, Ankaragucu defending well but struggling to keep the ball up top with their passing letting them down.

Into the second half and it was all one way traffic as Goztepe bombarded the Ankaragucu goal. Again against the run of play Bilal crossed the ball into the box but Sinan headed straight at Ferhat when he should have done better. Goztepe were causing problems with Halil and Ali Kucik down the flanks, a cross into the box nearly creeped in but Bayram was alert to tip the ball round the post.

Then came the goal, a throw in into the box which the Ankargucu defence failed to clear, the ball fell to Ali Kucik whose shot was nearly saved by Bayram but it hit the post and went in. 1-1. A couple of minutes later a fantastic save from Bayram kept the scores level.

Ankargucu had a half chance when Timur broke forward and passed inside to Gokhan but the later blasted well over. Goztepe almost went in front when breaking forward, the Ankaragucu defender tried to clear the ball but hit his own post. A lucky escape. Bayram made another excellent save from Ali Kucik, then seconds later Goztepe hit the bar and from the rebound Bayram somehow saved with his leg with outstanding reactions.

Umit Kurt saw his free kick from 35 yards easily saved by Ferhat as the game ended 1-1. Ankaragucu need to start preparing for Lig 2, but the big problems lie off field. It will be interesting to see the developments through the week.
By Nady - November 17, 2012