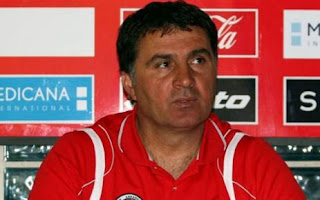 Former Ankaragucu assistant coach and Genclerbirligi manager Mustafa Kaplan has been handed the impossible task of replacing Yilmaz Ozlem as manager of Ankaragucu. News broke last night as Yilmaz Ozlem and Taner Ocal were given their marching orders. Rumours in todays media outlets claim Cemal Aydin instructed Mehmet Ural to make the decision to sack the pair after the club lost again to Tavsanli.

In other news, Muhammed Turkmen will not play again for the club after he was involved in a fight with Goalkeeping coach Murat Turksoy. Only last season Turkmen was dropped from the squad after a dispute with Hakan Kutlu. Ankaragucu A2 team today beat Ankaraspor 3-2 thanks to goals from Sefo Teoman and Enes Kubat.

And some nice words from ex Ankaragucu favourite Augustine Ahinful as the fans favourite sent me a message on Facebook to say Ankaragucu ill survive. Its nice to see we still hold a place in his heart but i don't think he knows just how bad things are at the club. If only we had a player of his ability at the club just now.
By Nady - November 12, 2012