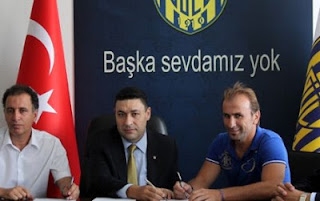 The first task of the new Ankaragucu management tonight was to terminate the contracts of Manager Yilmaz Ozlem and his assistant Taner Ocal. Both were appointed in the summer after Hakan Kutlu resigned from his role at the club. After only one win and the club sitting bottom of the league, new President Atilla Suslu has made the decision to sack the pair.

The decision will be unpopular with the fans and players especially with Yilmaz Ozlem being an ex fans favourite during his playing career at the club. Mustafa Kaplan has been tipped for the vacant managers position but what the new President must realise is that even Alex Ferguson would face the impossible task of saving Ankaragucu. Its matters off the field that need to be sorted.

News on twitter also saying Hakan Kutlu could return and there will be a press conference on Tuesday. Thank you Yilmaz Ozlem and Taner Ocal for your efforts, you deserved better than that.
By Nady - November 11, 2012