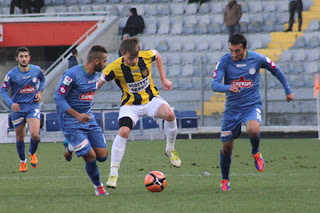 Ankaragucu striker Sinan Kurumus is close to agreeing a move to Besiktas according to reports from the Gecekondu website. The 18 year old striker has stamped his place in the first team since the arrival of Mustafa Kaplan as head coach.

The move will come as a bit of a surprise for both the player and the club with players such as Timur, Umit and Mert all tipped for a move to the Super Lig before him. The club have managed to come to an  agreement with Umit which will see the big defender stay at the club for the time being.

In other news, as mentioned in the match preview thread, Ankaragucu have agreed to pay Calvin Sosibo his outstanding payments over 8 instalments starting in February. According to a source close to the Round Ball in Ankara there could be some good news in the near future in regards to the future of the club. We will keep you updated.

The transfer of Emre Tasdemir to Trabzonspor has fallen through, Ankaragucu should register him after the winter break as the talented youngster is more than capable of playing in the first team and would also give Mehmet Tasci a bit of competition for that left back spot.
By Nady - December 21, 2012