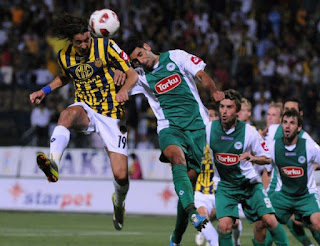 Before we look ahead to this weekends match with Konyaspor, Klasspor broke some important news regarding the future of Ankaragucu and the upcoming congress. It has been revealed that Mehmet Yiginer will run for President of the club and will look to lift the current transfer ban and has also said he wont sell any of the current players.

We have heard this far to often with previous candidates, all the lies and broken promises. Mr Yiginer is also a very close friend of Melih Gokcek and held a meeting with the Mayor of Ankara before announcing that he will be running for president. On the other hand current President Atilla Suslu spoke positivly about the situation saying they can work together for the sake of Ankaragucu. The big question is the role in which Melih Gokcek will play in all this ?

Onto Sunday afternoons match at home to Konyaspor. A huge game again for Ankaragucu as this is the last game before the winter break. A home win and three points would give the club the lifeline which would keep them in with a chance of survival and allow the new president to bring in experienced players for the second half of the season.

The last time both sides met Ankaragucu won 2-0 in Konya thanks to a double by Drago Gabric. That same season Ankaragucu also won 4-1 at home thanks to goals from Ozgur Cek, Metin Akan, Jan Rajnoch and Stanislav Sestak after Konyaspor had taken the lead. Both sides are unrecognisable since then having gone through so many changes.

Konyaspor are sitting in the bottom half of the table nine points ahead of Ankaragucu who are rooted to the bottom. They are currently unbeaten in their last three games having won at Manisaspor whilst drawing at home to Sanliurfaspor last week. Ankaragucu on the other hand were unlucky to lose 2-1 at Denizlispor thanks to poor refereeing decisions that cost the club at least a point.

Ankaragucu will be without Umit Kurt through suspension which will be a huge blow as Umit has been the clubs best performer to date. Mehmet Tasci, Kaan Kanak and Mert Erdogan are all carrying knocks and will be hoping to be fit for the game. Another tough call this one, but if Ankaragucu can perform to the same level as they did at home to Rize a couple of weeks ago then there is no reason why we cant win.

Ticket prices are 5 Turkish Lira so get along to the 19 Mayis Stadium 1300 on Sunday afternoon to cheer the team on to victory.
By Nady - December 20, 2012