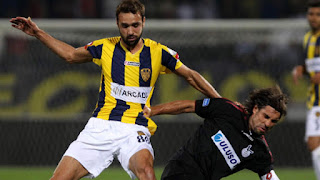 Umit has been a rock at the heart of the Ankaragucu defence and looks to have a big future ahead of him. There is no doubting he is good enough to play in the Turkish Super Lig and to loose him for nothing would be a huge blow to the club.

Serkan has become an important member of the team, a flair player who can change a game with a touch of skill, just needs to find consistency. Again like his team mate Umit it would be a huge blow to loose him for nothing.

Ankaragucu are asking where the 900,000 the club is owed from the sale of Turgut Dogan Sahin to Gaziantepspor is ? And also the money for Ishak Dogan who went to Karabukspor. The club have been asking the same questions for a year now and the Turkish FA have still not investigated.

In the last couple of minutes Klasspor has reported that Orhan Evci, Bilal Gulden, Gokhan Akkan, and Kaan Kanak would all be free to go if the wages owed to the players arent paid before Christmas.