Ankaragucu and the battle against Hooliganism ! 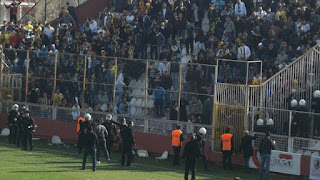 Ankaragucu were last night handed a further 2 match stadium ban due to the crowd trouble at Kartalspor last weekend. That takes the total ban to 7 home games as the club are already serving a 5 match ban for the trouble at home to Konyaspor. It is another blow to the club who are suffering the darkest days in the clubs history.

Ankaragucu have long had a problem with crowd trouble, every season the club are handed stadium bans from the Turkish FA along with the majority of other clubs in the Super Lig, PTT Lig and amateur leagues. Anytime there are incidents at games the Turkish FA's answer is to hand out stadium bans. Only recently they changed the rules to allow women and children only.

For clubs such as Fenerbahce, Trabzonspor, Besiktas and Galatasaray, they can still attract large crowds for women and children only matches, but the rest of the Turkish clubs suffer and lose income from tickets and fines handed out by the FA. Turkish clubs have tried but failed to control their fans, so the question that must be asked, is it really fair to punish all fans and the club for the actions of those who continue to bring violence to the terraces ?

Crowd trouble in Turkey is more of a social problem and not a footballing problem. Ankaragucu for example are a club for the poor and working class. The clubs biggest ultra group Gecekondu are known as the people from the slums and are the most feared ultra group in Turkey. No stadium ban or fine is going to change the behaviour of Gecekondu. They are so proud to be from Ankara and don't take kindly to any derogitary songs or comments from opposing fans especially from Istanbul.

These people don't have the same education levels or social skills with coming from a poor back round. Turkey is one of the worlds fastest growing economies and Ankara is the capital. Is Ankara really doing enough for its people ? Catch the bus from the airport through to Ankara city centre and you will see the slums in Ankara and that will tell you all you need to know. Then you have to ask, if the city did help and wanted to build proper houses in the slums, would the people who live there allow it to happen ? These are proud people.

The Turkish FA need to look at the policy for crowd trouble again, can they honestly say these stadium bans have reduced crowd trouble in Turkish football ? The answer to that is no. Every week there are stadiums playing with no fans and the only ones who suffer are the clubs. With Ankaragucu on their knees the loss of 7 games income just puts the club under more pressure.

Its time for the sports minister Suat Kilic to deliver a new stadium in Ankara, anyone can buy a ticket for an Ankaragucu match, with no name or seat number it is near impossible for police cameras to find anyone involved in crowd trouble and ban them. Like the British stadiums, every fan has their own seat and seat number which helps identify any trouble makers.

Its more than likely the Turkish FA will stick to the same lazy rules of banning everyone for the actions of a minority.
By Nady - March 01, 2013