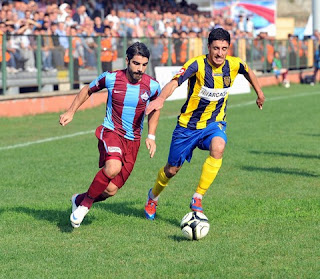 Ankaragucu host in form 1461 Trabzon on Saturday afternoon at the 19 Mayis stadium in what will be another women and children only match due to the current stadium ban. Ankaragucu are still 9 points from safety and things could have been so different had they taken their chances in the matches after the break. Two great chances late on against Kayseri, a penalty miss against Sanliurfa and missed chances at Buca at the weekend are the difference between wins and defeats.

Enes Kubat will miss the match due to suspension with Teoman set to replace him in the starting line up. 1461 are in 4th place and are still hoping to make those automatic promotion places. They have quality players in their team with Torric Jebrin on loan from their parent team Trabzonspor the star of the team. The last time both sides met 1461 won 1-0 in a scrappy game. Ankaragucu have improved a lot since then but have still found it difficult to win games.

Timur Ozgoz will be looking to get back amongst the goals after a dry spell and a drop in confidence, the last couple of games he has been playing just off Enes Kubat but on Saturday will be the main striker. Ankaragucu will need to keep it tight at the back but more importantly finish any chances that come their way. Bilal Gulden has upped his game since the winter break and even made team of the week for the Turkish PTT Lig after his performance at Bucaspor.

It remains to be seen weather Mustafa Kaplan will recall Mert Erdogan into the starting line up after he was dropped and axed as captain. Serkan Sirin has taken his place and done ok, but if Mert can get back to his best form he needs to start.

Another tough game and one in which unfortunately i cant see Ankaragucu winning, but the same was said when we played Caykur Rizespor and Adanaspor and against the odds we took all 3 points. Lets hope for the same on Saturday.
By Nady - March 06, 2013