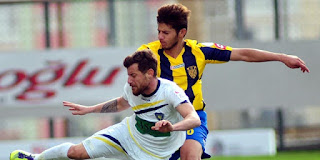 Ankaragucu came away with a point at Buca in a dreadful game and will be disappointed that they couldn't take all 3 points. As always the Ankaragucu fans turned up in their numbers and showed their loyal support to the players who took the field. The last time both sides met Bucaspor won 5-1 in Ankara so a big improvement since then. The result a bit more impressive by the fact Ankaragucu had to play more than half the game with 10 men after Enes was sent off.


The first ten minutes of the game passed with no chances or any talking points in the game, both teams struggled to keep the ball and neither could create anything. Bilal did have a half chance after 11 minutes but his shot from the edge of the box went high and wide. A few minutes later Bayram made an easy save from a weak header in the Ankaragucu goal.

The first real chance of the game came on the 31 minute mark, a lovely cross by Kaan from the corner which was headed back across the face of goal, Volkan Geyik got on the end of it but Omer made an excellent save in the Bucaspor goal .

Two minutes later and again Ankaragucu went close, this time Gurkan floated a free kick towards Timur who knocked the ball down in the box for Bilal who shot just over. Ankaragucu were starting to look good and the more likely to take the lead. The home fans were starting to get on the Bucaspor players backs due to their poor passing.

Then came the games turning point after 41 minutes, Enes went in for a 50-50 challenge with Omer the Buca goalkeeper, Omer got to the ball first but Enes followed through catching him late, Omer went down like he had been shot. A yellow card yes, but the referee much to the amazement to everyone in the stadium pulled out the red card. Ankaragucu were left with it all to do.

Just before half time Kaan had a 40 yard free kick tipped over the bar by Omer. Half time 0-0 and a poor game for any neutral watching.

Into the second half and you would expect Bucaspor to start to dominate and take the game to Ankaragucu, instead it was much the same as the first half with Ankaragucu having the better chances. First chance was for Timur whose shot from just outside the box was saved by Omer.

Bucaspor had a good chance to take the lead after 55 minutes, Irfan crossed the ball into the box which Bayram misjudged, but the Bucaspor attacker could only head over when the net was empty. A lucky escape for Ankaragucu. Orhan Evci replaced Kaan Kanak for Ankaragucu after 63 minutes.

Bilal Gulden was the man of the match, covered every blade of grass and tried to support the attack at every opportunity. Timur set him up on the 65 minute mark but Bilal fired high and wide. At the other end Civar crossed the ball into the box for Erkan who could only head straight at Bayram. The best chance of the second half fell to Ankaragucu. Good play down the right from Orhan who picked Timur out in the box, but Timur fired over the bar, a great chance for the German striker.

Bilal had another shot from distance but Omer made the save to keep the score level. Emre Tasdemir was brought on after 83 minutes for Gokhan Erdogan to make his debut. Timur played the youngster in on goal in the last minute but he fired his shot over the bar from a tight angle. Metin Aydin replaced Serkan Sirin in the dying seconds to waste some time.