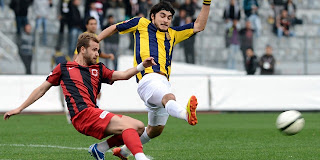 Ankaragucu travel to Tavsanli on Sunday for this weekends must win match against Tavsanli Linyitspor. Both teams are involved in a relegation battle and know they have to take the 3 points or start preparing for life in Lig 2 next season. The visitors will want to make sure they improve on last weekends 4-1 defeat at home to Adana Demirspor.

As i mentioned in last weekends match report, Ankaragucu were the better team for 44 minutes. They even had a glorious chance in the first minute to take the lead, but like to many times this season they missed an excellent opportunity. Adana scored on the stroke of half time and from there on dominated the match. The experience of their strikers showed as they took 4 of the 5 opportunities that came their way.

Tavsanli won the last match 1-0 in Ankara earlier in the season thanks to a Mesut Saray goal. They have the exact same record as Ankaragucu in their last 5 matches. They have won 1, lost 1 and drawn 3 games. They currently lie 8 points ahead of Ankaragucu and a win could take them outside the drop zone. A win for Ankaragucu would give them some hope again but they players need to take their chances and not let their heads drop if things go against them.

Since Mustafa Kaplan has come in as coach, he has done an excellent job but one decision i think he has got wrong, is his decision to drop Mert Erdogan. He hasn't played in the last 2 games and the last game he played we won. Mert needs to come back into the midfield in place of Serkan Sirin. The later is a very good player on the ball but his fitness and work rate let him down. Mert and Bilal are a good partnership alongside Kaan Kanak.

Two young players who will be looking to break into the first team are Hasan Ayaroglu and Emre Tasdemir. Both are highly rated and have represented Turkey at Youth International level, they have bright futures ahed of them and this is a good learning curve for them. Tavsanli have some good players and Ankaragucu will need to watch out for Akeem Agbetu and Abdi Aktas who are both capable of giving defenders a tough game. Akeem is quick while Aktas brings experience and knows where the net is.

We have sai this on many occasions this season, but this really is a must win match for Ankaragucu, a defeat and Mustafa Kaplan will need to prepare for next season and the management team will need to look at which players will stay and play in Lig 2.
By Nady - March 27, 2013