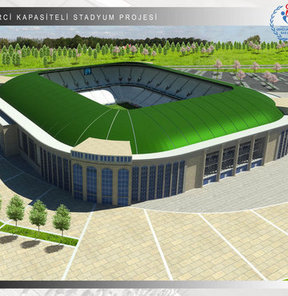 Further to the brief discussion between Bellshill Kanka Nadeem and me yesterday on the subject of 'The New Ankara Stadium', there was some details in The Hurriyet Newspaper this morning.

From the artist's impression it certainly looks quite impressive.   So, all we need now is a name for it.   Let's call it Satan Stadium ??!!

As I mentioned yesterday, the Eskisehir Road stretches all the way from the City Centre to the outskirts of Ankara where the ring road meets it.   Approximately at Konutkent which is about 30 Klicks in all.

Satan Stadium is going to be built just off the Eskisehir Road at the exits for Umitkoy and Etimesgut which by my reckoning is about 25 Klicks from the City Centre.   Without the Metro, and taking into account the weekend shopping traffic, it will be a nightmare to get a bus to there, especially with a large Ankaragucu contingent of supporters.    There is also another problem when Gencler is playing the likes of the Big 3.

Even with the Metro up and running, I have to assume that they will be running it into Umitkoy for the Shopping Centres rather than the Stadium's convenience.   So, in that scenario, how to get the supporters from Umitkoy to the Stadium ?

There is also another problem which I envisage, ie, time !

For example, on my many visits to Ibrox Stadium to see Hibs play Rangers, I was obliged to take the Clockwork Orange Underground train from the City Centre to the Stadium.    All well and good normally, but the nightmare begins at the end of the match when 40,000 punters exit the Stadium and a good majority of them want to return to the City Centre.    I have stood in a queue for ages waiting to board a train !

These are all ifs and buts at this stage until we know more details.   Also, seeing an artist's impression of Satan Stadium is not quite the same as seeing it rise from the ground !

However, perhaps the bottom line to this story is nicking Nadeem's comments from the previous post, ie, the first thing we need to do is to ensure that we have a team to play in the effin Stadium !!!