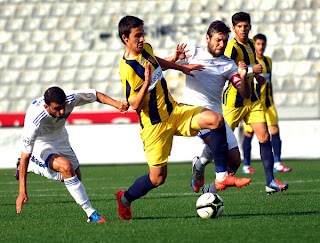 Match preparations got underway today as the Ankaragucu management sacrificed a sheep for the players ahead of Sundays match in Gaziantep. In Turkey this is a show of support and sign of good luck to the players. Before we look at the weekends aid game, a bit of news in today regarding a new stadium in Ankara. Mehmet Yiginer said today that he is against the new stadium being located on Eskisehir Road. Yiginer said that the stadium should be built at the current 19 Mayis stadium grounds. The transport links were the main talking points with Yiginir saying it is much easier for the fans to access. We await more on this subject. It was also reported by Klasspor that Cengiz Topal, Cemal Aydin, Sami Altinyuva, Bent Ahlat, Erk Toros, Hikmet Hancioglu, Nazmi Erdener, and Serdar Ozersin will all be referred to the disciplinary board in regards to the previous management of the club.

Back to this weekends game, Ankaragucu travel to Gaziantep full of confidence, but will need to be careful that they keep their feet on the ground and respect their opponents. Gaziantep BB like Ankaragucu are a team made up of Turkish players, they have performed above expectations this season and are still in with a chance of making the play off places. They have proven difficult to beat and showed that last week with a 1-0 win at Sanliurfaspor. The last time both sides met Gaziantep won 4-1 in Ankara after Umit Kurt gave Sari Lacivert the lead. Ankaragucu have improved since then and should provide a much tougher game for the home side.

One player Ankaragucu will need to mark closely is Serdar Deliktas who has 10 goals this season, he scored 2 goals the last time the two teams met so the Ankaragucu defence will need to do their homework. Mustafa Kaplan has transformed this Ankaragucu team from the whipping boys, to a team full of passion and heart that teams dont like playing against, there is no doubt that Ankaragucu would be sitting higher up the table if he was Manager at the start of the season. The gap is now down to 5 points and another win at the weekend would put the club into a fantastic position ahead of the match with Adana Demirspor the following week.

Ankaragucu will then go into the most important three weeks of the season when they play 3 other teams above them Tavsanli, Goztepe and Samsunspor. Those games will decide the fate of Ankaragucu, lets hope after the Samsunspor match that Ankaragucu are clear of the relegation zone. Yet again the likes of Timur Ozgoz, Bilal Gulden and Kaan Kanak will need to perform to the best of their ability and spur the team onto victory. The game will be shown live on TRT Web TV on Sunday afternoon. There will be live blogging from the Round Ball in Ankara so tune in to keep updated with the game.
By Nady - March 14, 2013