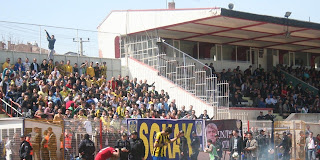 went to Tavsanli to go rabbit hunting but the hunters became the hunted, and I'm afraid we are the ones who got stuffed by their line up of

The match started well enough. The weather was beautiful and sunny and 33 degrees, perfect footballing weather. Both the Tavsanli and AG fans were out in numbers and in good voice, and it  was pretty much an even contest up until the 45th minute when Mesut backheeled a ball to Ferhat and with the AG defenders giving him ample time and space he launched a shot from outside the box that had Bayram diving to his right but grasping at air.

It wasn't long before Facebook was lighting up with AG fans condemning Bayram. However had the defense closed in on Ferhat more quickly, he probably wouldn't have been able to get the shot off. And really why had we not scored by that point? There had been numerous opportunities that our boys had just not taken advantage of. Plenty of blame to go around. Unfortunately while Mustafa Kaplan apologized to the fans for the performance in the post-match interview, the players Teoman, who at one point blew a chance where he was one-on-one with the keeper Metin, and Enes Kubatli, who had started off with a bang but had quickly fizzled out, blamed it on fate and destiny.

Now this is one of the things that drives me nuts about Turkey sometimes. No, it was not fate or destiny, you guys did not take advantage of the chances you had, and there were plenty. Just say "we tried hard but we fell short, and we're sorry." Take some responsibility.

And was this not exactly the same case as last week? Let's recall what Bellshill Kanka wrote in his assessment of last week's match against Adana.

As i mentioned in last weekends match report, Ankaragucu were the better team for 44 minutes. They even had a glorious chance in the first minute to take the lead, but like to (sic) many times this season they missed an excellent opportunity. Adana scored on the stroke of half time and from there on dominated the match.

Pretty similar. Kaplan despite the great job he has done overall, has to make sure that we stop losing for the same reasons week in and week out.


In any case, the team came out looking fairly sharp after the halftime break, and the match proceeded much as it had in the first half, with both teams getting plenty of opportunities but with neither of them really able to capitalize on them.

Much as Nadeem had predicted, Agabetu was incredibly quick and dangerous, but it wasn't until the 87th minute when Agabetu, after countless prior attempts, was really able to penetrate into the box from the left. With a cut back, he put the ball in the path of the  pot bellied veteran Abdi Aktaş (aka The Old Wolf) who put it past Bayram and into the net. A very happy moment for The Old Wolf, who had come on about twenty minutes earlier, and his teammates, but a death knell for Ankaragucu.

And that is pretty much this week's story. Although perhaps I should mention that one of our players got hit by an explosive device, that the announcers were calling a sound bomb, thrown from our own tribune. "What is wrong with some of our fans," I have to ask myself from time to time.

At the 73rd minute mark there was a whole cluster of these devices going off and the match had to be stopped. This did not make the locals too happy, and by the end of the match they were calling our fans sons of bitches, and, to be fair, we did not behave ourselves well. It is not the people of Tavsanlı responsible for the mess we are in. Show a little class guys. I am not advocating violence, but if you really must throw something, throw it at the people really responsible for where we are now--you know who they are.