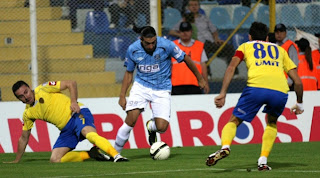 Ankaragucu go into this weekends match against Adana Demirspor on a four match unbeaten run after last weekends 1-1 draw at Gaziantep BB. It remains to be seen just how much that late goal for Gaziantep will have effected the Ankaragucu players, but after speaking to Timur Ozgoz the German striker still believes we have a chance and is hopeful of a victory at the weekend.

Looking at the positives from last weekends match, Ankaragucu again played some excellent football while defending well at the back, indeed we were the better team right up until Orhan Evci was sent off. Teoman also had a goal wrongly ruled out for offside. The negatives would be that Ankaragucu need to learn how to kill off games, that is now 9 games this season where we have taken the lead but failed to win the 3 points.

When Ankaragucu sold Umit Kurt in the January transfer window all hope was fading, but Gurkan Alver has shown that he is a good replacement and has improved week after week, his leadership skills and discipline have helped Ankaragucu and made the team more difficult to beat. Bilal Gulden goes from strength to strength and looks like he could turn into a very good Super Lig player.

Since Mustafa Kaplan has come in he has done a fantastic job, he has got his tactics spot on and the team play with more confidence. Last weekend for me was the first mistake he made when leaving Mert Erdogan on the bench and starting with Orhan Evci, i think we need to put Aytac back to right back and Mert back in midfield alongside Bilal and Kaan.

Adana Demirspor have hit a bit of a bad run of late and haven't won in their last 6 matches. Their playoff hopes are fading unless they start winning games again. They will go into the match knowing they have to take the 3 points. The last time both sides met Adana won 4-1 after a fantastic second half performance. Ankaragucu will need to watch the two Brazilians Juninho and Luiz Eduardo but the main player for Adana is Ercag Evirgen who for me is one of the best players in the PTT Lig.

In news off the field, Ankaragucu management have paid outstanding payments to Hans Peter Briegel, Roguy Meye, Werner Schoupa, and Dirk Wuhlbier as the club continue to try and reduce the debt. Saturdays game is 1pm Kick off at the 19 Mayis Stadium.