Questions and Answers with Ante Bakmaz ! 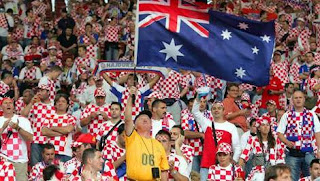 Nadeem - So Ante tell us a bit about your footballing career so far ?

Ante -  I was born in Sydney, Australia to Croatian migrants and began playing for my local team in Sydney. As i grew older i played for a team called Sydney United who are one of the biggest teams in Australia and where Michael Jedinak (former Genclerbirligi player) played. I then moved from Sydney United to Granville Range (who are in the Second division) when i was 16 to play senior football. It was here where i developed physically , technically and tactically as a footballer and got a lot of game time in the first team.

Nadeem - You also spent time in Croatia is that correct ?

Ante - I was fortunate enough to go on trial with Croatian First Division side NK Zagreb. It was very successful however i had problems with some documents which prevented me from signing. I returned to NK Zagreb again at the end of the 2011-12 where i was training for 6 months. The club was however in a very weak financial situation. I returned to Australia again where i had two career threatening injuries. I was advised by doctors, physios, coaches and players that i should stop playing for my own quality of life's sake. I decided not to listen to them because the last thing i wanted was people trying to take my dream away from me. I began to work on rebuilding my body and I'm now a few weeks away from full training to prepare myself for what lies ahead of me at the end of the season.

Nadeem - How did you find out about The Round Ball in Ankara ?

Ante - I was actually very lucky, Ankaragucu and Karabukspor were playing in the league and i just wanted to read the preview of the match somewhere before i watched the game just to know what i was in for. The only problem was the many links were in Turkish and i could only manage so much. Luckily the link for the Round Ball in Ankara came up and from then on i have taken special interest in Ankaragucu and Genclerbirligi especially becuase the blog is in English and i check every weekend to see what is new in Ankara.

Nadeem - Your cousin Anthony Seric plays for Karabukspor, what has he told you about Turkish Football?

Ante - Yeah that is correct, He signed in June 2010. Sera and i are very close and i am grateful that i have someone to talk to about football and life. One thing he always talks about is the passion. The passion is unbelievable ! He also constantly mentions the way in which the supporters treat the players is fantastic and appreciates the passion all the fans have towards their teams.

Nadeem - The last Croatian to play for Ankaragucu was Darago Gabric who was a fans favourite, do you see yourself playing in Turkey or even Ankara one day ?

Ante - I used to watch Drago Gabric as a boy when he was playing in Croatia and always found him to be a player of technical superiority and great tactical awareness. I can see why Ankaragucu fans appreciated his contribution to the club. Of course i do see myself playing in Turkey and i feel i have what it takes, not just to play, but to contribute. Playing for either team in Ankara would be an honour and bonus. Both clubs are massive, its like picking a blonde or a brunette, both are beautiful and amazing in their own right.

Nadeem - What attracts you to Turkish football ?

Ante - From a football perspective the aggression and will to win combined with the technical ability of All players really makes the Super Lig and PTT 1 Lig great to watch. Personally i feel my aggression, will to win and technical ability are my strongest assets of my game and would probably say that is the reason why i am so attracted to Turkish football. The supporters dedication and passion cant be compared to anywhere in the world. Watching the match between Ankaragucu and Konya in early december really struck me. People immediately see the incidents on the day and label the people hooligans and thugs, however those incidents just shows how much (in that case, Gecekondu) the fans will do anything to see the club succeed and will not tolerate ridicule from people outside of Ankara invading their city and turf. Therefore as a player if you give less than 100% for the name in front of the shirt then that , in my opinion, is simply not acceptable.

Nadeem - Which team did you grow up supporting ?

Ante - Growing up in Australia, the English Premier League was the only thing available to me. I supported Fulham growing up. The only problem was the banter i would get from the kids at school was a bit annoying.

Ante - Ankargucu, Something about the club, the colours and the Gecekondu really strikers me. The fact that the club has pretty much hit rock bottom and continued to, not just play, but compete and get results despite some poor decisions really inspires me. So Ankaragucu !

Ante - A tough question, its the same as picking between Pide or Kebab ! Personally i would pick Messi, however too many people who do pick him disregard Cristiano completely. I think we should just appreciate there are two footballers of this calibre playing at their peak at this moment in time.

Nadeem - Once again thank you very much Ante for taking time to do this interview, really appreciate it.

Ante - Not a problem my friend, as a boy i really didn't like players who would refuse interviews and autographs. I feel the fans have an obligation to know what type of person is wearing their colours on their heart.

With the current transfer ban it will be difficult for Ankaragucu to offer Ante Bakmaz a deal, but there is no doubting he has the right kind of attitude to play for the club. Lets hope he gets his dream of training with the club and one day puts on the Sari Lacivert. 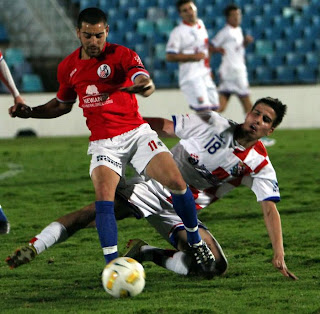