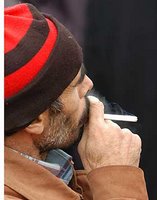 There are many reasons to love Turkey, some say its the traditional Turkish hospitality, some love the cuisine, while one fellow I know loves the Formula 1 race/demolition derby that is the daily commute to work.

All good reasons sure, but for me it is Efes beer, Tekel 2000 cigarettes and football.

Obviously, the highlight of week is when I can combine all three but soon I think I may have to emmigrate to somewhere civilized like Tajikistan if I am to experience true happiness.

The assault on Efes has been going on for the past few years. The Justice and Development Party (AKP) government have been steadily increasing alcohol taxes to the point that it is now cheaper to buy a can of lager in an English supermarket than one in Turkey. Preposterous!

Then the AKP-controlled Ankara City Council decided to renovate Genclik Park next to the 19 Mayis Stadium. While the park is definately in need of cleaning up, there is no way that this secularist can support the plans to kick all the pubs out of the place.

They cut the water off to the pub we used to go for ages and we have been forced to meet up in Kizilay for our pre-match drinks.

Smoking is to be banned at stadiums!

The parliament is due to vote some time soon on a bill that will drastically reduce the places where people can smoke.

I admit that even I would feel a bit guilty having a smoke in a maternity ward (at least if you couldn't open a window) but at the football! The TDN today (sunday) has quite a detailed article on the whole thing.

"How can you prevent someone from lighting up while sipping a cup of Turkish coffee?" asked Isa Guven, president of an Ankara chamber of cafe owners. "They are using the EU as an excuse to kill off our ancient profession."

(I wonder if this was the same chamber of cafe owners which launched legal proceedings against some cafes which offered free tarot card readings?)

I'm in total agreement with a couple of members of a parliamentary committee who have put up a brave fight to stop this nonsense from becoming law.

Gumushane deputy Mahmut Durdu said every article of the anti-smoking bill was problematic, adding: "You are trying to ban tobacco. What our friends are trying to do is to execute all the smokers...

Durdu described quitting smoking as a breakup of two lovers, adding, "It would be wonderful if we removed smoking altogether, but that's impossible. I smoke and I am very healthy. Smokers need to be considered too. My parents pleaded with me to quit, but I failed to do so."

I agree, my parents too pleaded with me not to smoke and I failed too. But surely that's not my fault.

Then there is the medical argument as to why we should be allowed to continue puffing away at football matches.

Adiyaman deputy Hüsrev Kutlu ... argued that most diseases were due to stress, describing smoking as a way to combat stress. "It is impossible to quit smoking while involved in politics. Murat IV hung those who violated his bans. This law is not too different."

Not sure if Kutlu is a registered medical practioner but his point is bloody-well spot on. Eski Kanka Jim and myself would have died from heart attacks years ago if we weren't allowed to have a smoke after Ankaragucu or Genclerbirligi stuffed up yet another point blank shot on goal.

Now for the practical details. Apparently they are going to set up smoking areas in stadiums. Well, good luck to them trying to coral the vast majority of spectators into crappy seats. Talk about an invitation to riot.

Life in Turkey is becoming very depressive. But there is one point on which we can be consoled. The TDN again:

AKP deputy Resul Tosun said ... that only 49 people had been fined in the 10 years since the last smoking ban.

So that's my rant about Efes and cigarettes, as for my third love in Turkey, football, well that couldn't get much worse anyway.